4 Ph.D. neuroscience students from other countries share the challenges of studying in the US

International students make important contributions to the U.S. They can enrich scientific research through diversity of thought. They pay taxes, support businesses and jobs, and can help offset the cost of tuition for American students. Despite the many ways that international students benefit the U.S., a number of barriers make it difficult for them to advance their research careers.

Below, four international neuroscience doctoral students – from South Korea, China, Turkey and Brazil – share personal stories about the challenges they face in an education system that greatly restricts their ability to compete for federal as well as private grant money, travel to research conferences or continue to work in the U.S. after graduation.

Out of 500 applicants to the Young Investigator Training program for aspiring neuroscientists in 2019, only 60 were selected. So you can imagine the excitement I felt when I found out that not only had I been chosen, but so had my Emory Neuroscience Graduate Program colleague from Iran. But that excitement was short-lived when I found out that only one of us could attend the International Brain Research Organization’s World Congress of Neuroscience conference in Daegu, South Korea, that year.

The reason my friend could not go on this all-expense paid trip is that – even though she earned her spot in one of the most competitive neuroscience Ph.D. programs in the country – she had entered the U.S. on a single-entry visa, whereas I didn’t have any such restrictions on my visa.

My friend from Iran had only two options. One was to leave the United States to reapply for a 24-month multiple–entry visa and return after the conference. But this was a tricky choice because in case of a rejection, it could delay her education despite her good standing in the program. Even if successfully renewed, her F-class visa would have been valid for only two years for a program that takes more than five years.

The other option was to change her student status to something different, such as a worker, which required additional documentation and employer sponsorship to prove her renewed status. And even then, there is no guarantee of approval. Both of these options would risk disrupting her educational plans.

International students are typically advised not to leave the country without a reentry visa unless it’s for a family emergency or personal reasons for which you have to go home. Many international students have this lurking sense of the potential risk of not being readmitted at the border even with valid reentry visas. So you can see how nerve-wracking it must be for someone who only has a single-entry visa to leave at all. 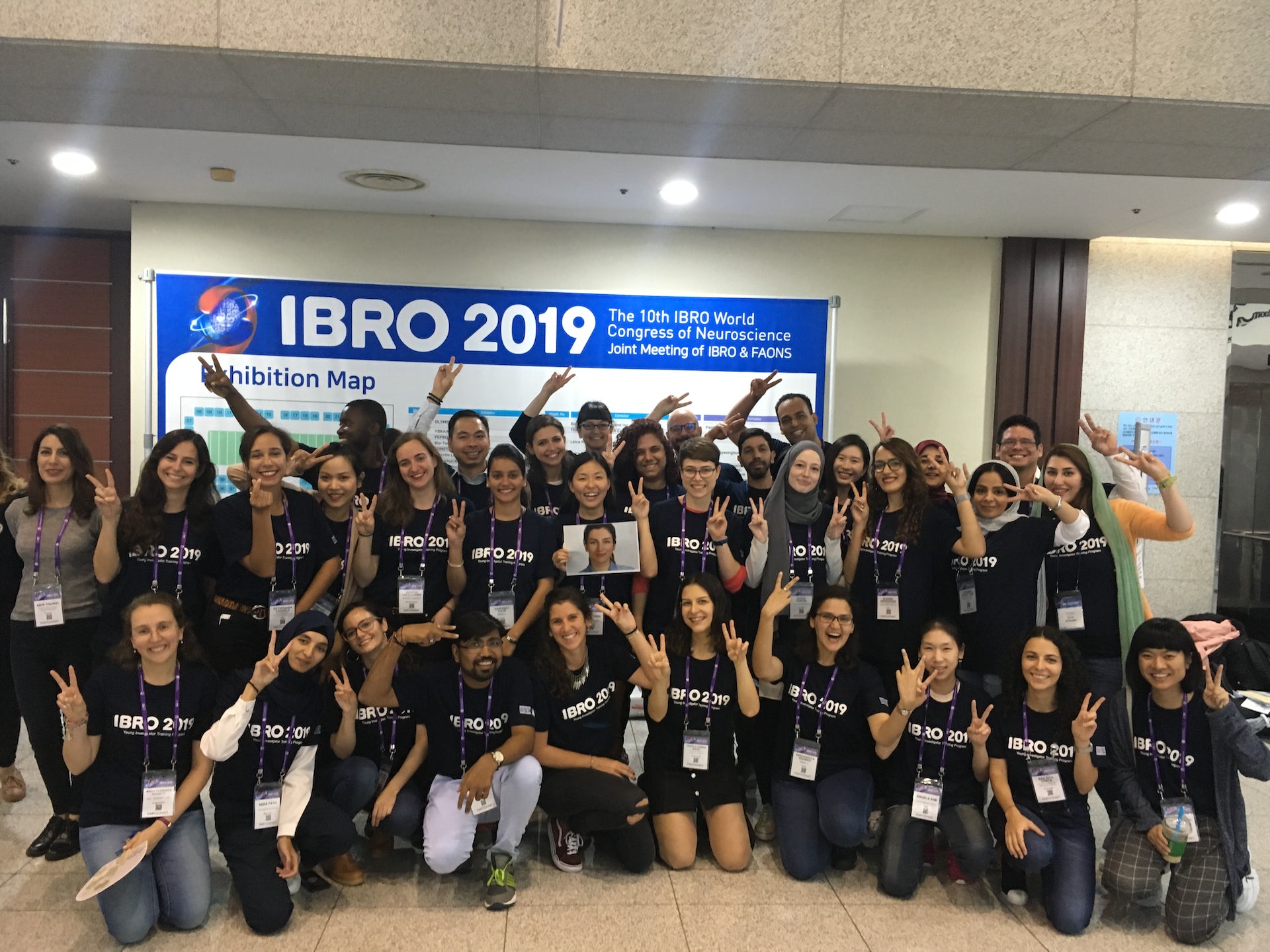 Nuri Jeong, in the center, holding a photo of her Iranian friend.

The conference that year meant a lot to me personally because I had not seen my family back home in Korea for two years. I could not imagine not seeing them for more than five years while in the program, as was the case for my friend. Feeling frustrated and helpless, the least I could do for her was to display her scientific research poster on Parkinson’s disease at the conference. In addition, I wanted her to be recognized for her award and raise awareness of situations like this that are all too common to international students. So at the conference, I held a photo of my friend when we took a group photo with fellow awardees.

Esra Sefik, Ph.D. candidate in neuroscience, Emory University, originally from Turkey, and a dual citizen of Turkey and Bulgaria

When I began my doctoral training in neuroscience in 2017, I used to think that government-funded grants and fellowships were within reach of any competitive applicant. Since then, I have come to see that this is not the case. And the reason is because of a question that appears in some form or another on most government-funded grant applications. And that is: Where are you from?

The applications may not ask that question verbatim, but they might as well because they typically have a requirement for citizenship or permanent residency in the U.S.

My beloved mother says I am “a citizen of the world” because I am a scientist. My hope is to one day help discover more effective therapeutics for currently incurable and severe neuropsychiatric disorders, such as schizophrenia, which transcend geographic borders. Unfortunately, when it comes to securing government grants to further this goal, my lack of citizenship gets in the way.

Consequently, in more recent years, whenever my mentors tell me about a grant or fellowship opportunity in my area of expertise, my first order of business is to scroll down to the eligibility requirements and search for the words “must be a U.S. citizen.” I often see those words, spoiling my chances entirely.

I am getting ready to begin a new chapter as a postdoctoral scholar. As a postdoc, funding becomes essential for continued academic development. One might think that citizenship status should no longer be a limiting factor for qualifying for a postdoctoral fellowship. Yet, a quick search of the U.S. Department of Veterans Affairs website for advanced fellowships or visiting the National Institutes of Health website on the F32 fellowship – a highly prestigious NIH-funded fellowship that provides up to three years of support to enhance the research training of promising postdoctoral researchers – shows this is not the case. In my view, it is time for the nation to move away from worrying about which country a person is from and realize that scientific progress requires drawing on talent from around the world.

Whenever I generate experimental data or help write proposals that have secured research grants from both private institutions, such as the Michael J. Fox Foundation and the American Epilepsy Society, or governmental bodies such as the Department of Defense, no one questions whether I am a U.S. citizen. But when it comes to applying for federal graduate student fellowships for myself, most, if not all, are off-limits. The reason is because they require U.S. citizenship or permanent residency.

This puts international students like me at a disadvantage, even though – from my experience – we work as hard as domestic students to contribute to the research and technology enterprise in the U.S. Many of us also do community outreach. For instance, I have given neuroscience lectures in middle and high schools around Atlanta and volunteered at the Atlanta Science Festival and Atlanta Regional Brain Bee. Beyond our graduate studies, we have to pay taxes just like everyone else.

As I reach the end of my Ph.D., nostalgia made me search my school inbox from the very start. It begins with emails going back and forth with my Designated School Official – a person who serves as a point of contact for international students – telling them I have no idea if they will approve my visa or if I will make it to the U.S. from Brazil before the semester starts. I did make it to Milwaukee, Wisconsin, a day before orientation. I arrived with no apartment lease, no friends or an American bank account. For my first few weeks, I stayed in a rental and failed at juggling school assignments, research and a new life as an international graduate student. Later that semester, I would be diagnosed with adjustment disorder with anxiety. 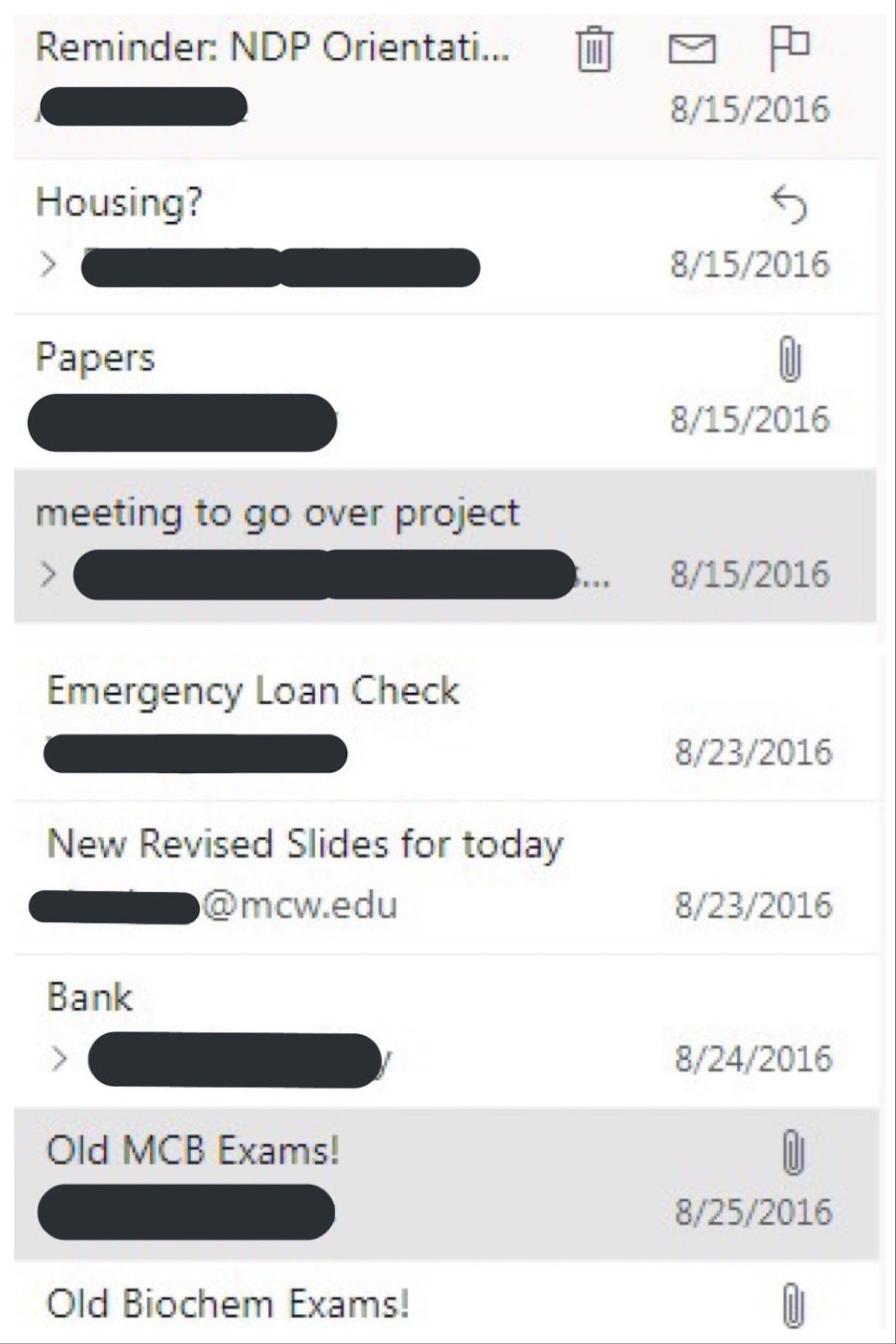 Chain of emails from 2016 showing a range of subjects from housing, old exams, emergency loans and banks.

It’s hardly a secret that graduate school is difficult. Lesser known are the uncertainties associated with being in the U.S. on a student visa. With me, most of the stress that came from my search for housing and figuring out my finances could have been better handled with a simpler and more transparent process of getting a visa approved.

[Over 140,000 readers rely on The Conversation’s newsletters to understand the world. Sign up today.]

The key argument a student visa application needs to make is that the applicant has no plans to stay in the U.S. after graduating. In some cases, like mine, that is a hard argument to make. I graduated with a bachelor’s degree from the University of South Florida in 2016 and now have a total of nine years of studies in the U.S. As a result, I have almost no significant ties to Brazil. In fact, the best document I could think of for my interview was my mom’s mortgage on our house back in Curitiba, Brazil. Simply put, I believe students who want to move to the U.S. and stay afterward should be able to do so. That is called a dual-intent visa, and it is not new. Several employment visas already allow for it. Student visas do not.

Opening up this new avenue for students, as some drafts of the U.S. Citizenship Act of 2021 do, could streamline and ease the life of hundreds of thousands of international students who either anxiously wait for their visas or get them denied every year simply because they want to move to the U.S. after they finish school.