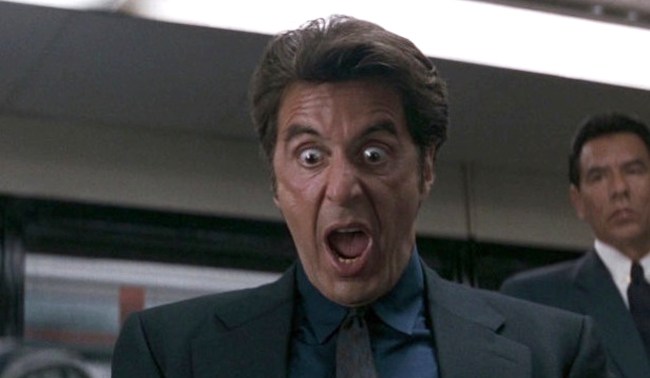 Later this summer, beloved director Michael Mann will be releasing Heat 2: A Novel — a book that serves as both a prequel and a sequel to his famed 1995 heist film Heat.

Mann’s first novel in his storied career, Heat 2 is an “explosive return to the universe and characters of his classic crime film—with an all-new story unfolding in the years before and after the iconic movie,” according to Amazon.

In case you’re unfamiliar, the original Heat saw legendary actors Robert De Niro and Al Pacino share a screen for the first time in the history of their iconic careers. While the pair both famously starred in The Godfather Part II, their characters existed in different times, meaning they never shared scenes.

With Heat now back in the pop-cultural consciousness due to the impending release of the prequel/sequel book, the film was recently screened at Tribeca Film Festival with both De Niro and Pacino in attendance.

Sticking around for a QA session afterward, Pacino — who is currently making Michael Mann’s Enzo Ferrari biopic with Adam Driver — was asked who he’d cast as a young version of Vincent Hanna, to which he replied he’d like to see “wonderful actor” Timothee Chalamet take over the part, according to reports.

While Chalamet is undoubtedly a gifted actor and one of his generation’s next great movie stars, he still needs a year like Leonardo DiCaprio had in 2006 when he starred in The Departed and Blood Diamond, thus finally convincing people that he’s more than just a pretty boy. Perhaps a Heat prequel could do the same for Timmy C.