This time last year, we got some time with the BlueAnt X5 which is a definite party speaker. Far too big to consider “portable” but very capable of building atmosphere at a party and — sorry again to my neighbours — even taking on the challenges of Karaoke. The other downside from last years speaker is the price, at $399.00 it’s not an impulse buy item.

On first look, this time around BlueAnt have addressed those criticisms, while still delivering a very capable party speaker.

While this isn’t something you can drop in your bag, the handle makes it easy to carry. The physical size is perfect for backyard entertainment, picnics or just to take your music with you throughout your home.

The speaker is IP54 rated so it will withstand the bangs, knocks and incidental spills or contamination (drinks, rain, dust etc) in daily life. But don’t be dunking it in your swimming pool or bath, it’s not likely to survive that!

Last year the Blueant X5 was a very impressive piece of hardware, but the problem was that it’s just too damn big to be practical. The X4 largely addresses that concern with significantly reduced dimensions (250 mm h x 240 mm w x 230mm d) while not losing but perhaps downgrading slightly in a couple of areas.

The speaker weighs 2.6 kilograms and puts out an impressive 50W of audio which is more than enough for home use or to fill a significant space if you’re outdoors. If that’s not enough, they have party mode where you can pair up to 100 — yes, 100 — of them to not just fill, but take over space! 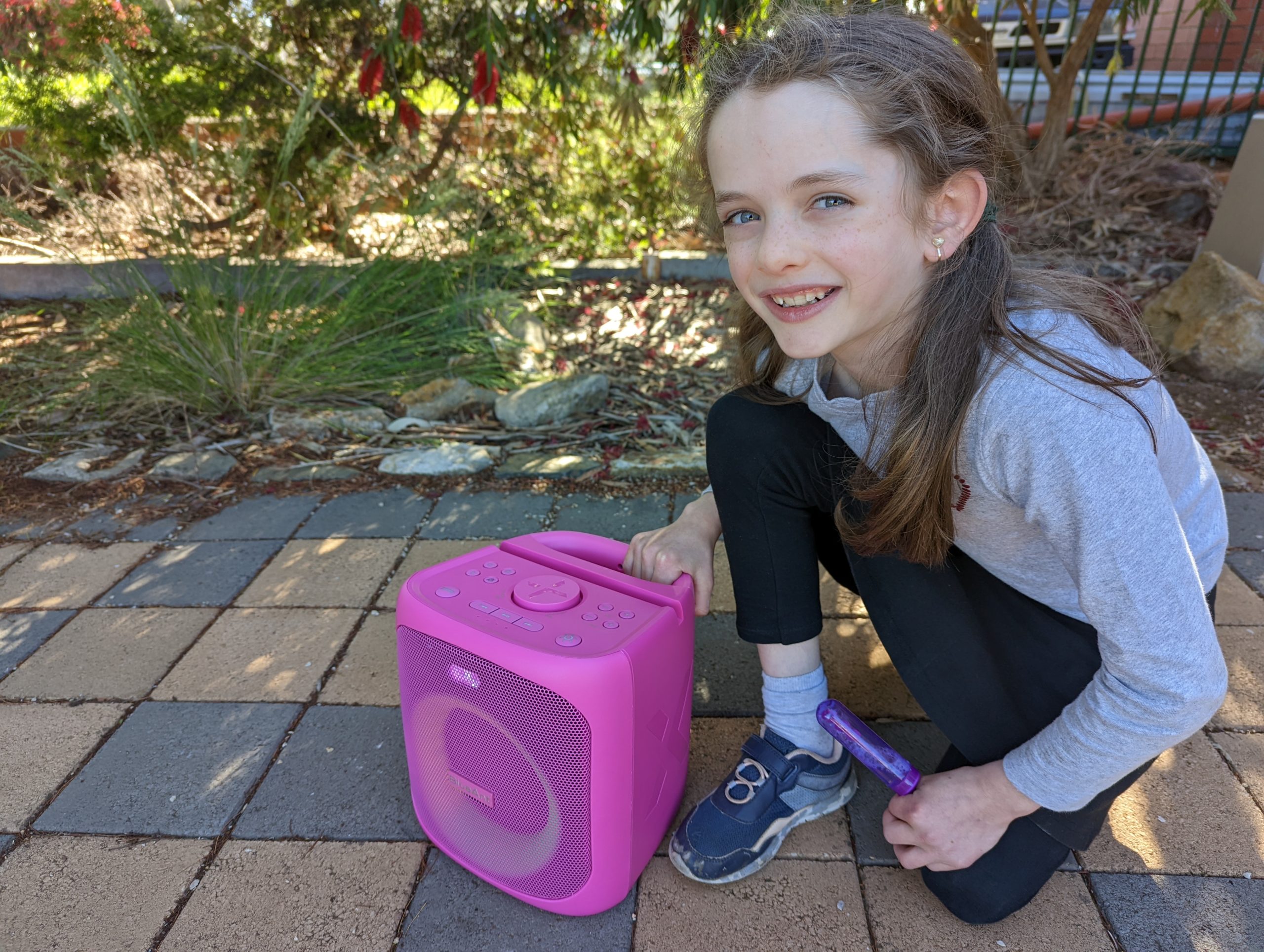 Blueant was kind enough to send two speakers over for review to test the party mode: Pairing speakers for party mode is as simple as triggering pairing mode on the primary (paired to your source device) speaker, then on any other speakers you want to be engaged. Even at a distance, there’s no lag on the speakers this is a case of “the more, the merrier”. It’s an impressive and simple implementation of a very useful feature.

The battery life seems to be a bit of a hit and miss affair this time around, but consistent if you’re paying attention. At approximately 30% volume, the playback time we’ve managed is around two days (14 or so hours) of consistent playback during business hours.

When you introduce the display lights or crank the volume that playback time drops pretty quickly. At a higher volume — a quick apology to my neighbours — with the lights on, the playback time was about 7 hours. That’s still plenty of time to last a full day of playback or a picnic/outdoor party without being concerned about losing your music. If you’ve got access to mains power, that’s not an issue – just plug in the DC and you’ve got a never-ending stream of music.

Once you’re connected to the X4 via Bluetooth (usual procedure) you can use the X4 like a “dumb” speaker, or you can really up your game. In this case, there are a number of options not just to control but to interact with your music.

The controls are near identical to the X5 speaker with a number of simple, single-touch buttons on top of the speaker. This includes power, party mode (on and off), lighting modes, bass boost, Microphone volume and echo for late-night karaoke — again, sorry to my neighbours — and playback controls.

While there is a Bass Boost button present, you’re probably not going to need it daily because the audio quality and balance are pretty impressive. Clearly, at a retail price of AU$299.00, you’d have a right to be disappointed if the sound was poor, but there’s not really a major concern here.

Many portable speakers noticeably don’t deliver on either the high range or bass. Listening to everything I could think of from podcasts to music (including orchestra to death metal), YouTube streams and Netflix the X4 delivered consistently good sound. The vocal range is surprisingly clean, with no noticeable distortions even when playing at high volume. The highs are high and clean, even listening to orchestral scores or guitar solos from the 80s. The lows deliver a bit of punch without being overpowering but if you want a bit more for an outdoor setting (or you just like your brains rattled) then whack the bass boost for that penetrating punch.

So the usual question: Should you buy one?

If you’ve already got a Bluetooth portable speaker you’re happy with, probably not. If you’re looking for an upgrade, or you’re looking to grab your first Bluetooth speaker, there’s a lot to like in the Blueant X4 package.

The setup of the speaker is really simple, as is the playback controls. The battery in the Blueant X4 gives you a good playback time and the audio complements this well. The fact that you’ve got extras onboard like the capacity to charge your devices while out and about and the microphone is a huge bonus, offering value.

The mic can be used for karaoke, but it also opens up extra applications for users who need a PA system on the move. It’s far from the smallest speaker we’ve seen, but it is very easy to transport and with the IP rating it’s safe to use your speaker in the great outdoors without worry. This isn’t an everyday carry because of the size, but it’s worth making the effort it takes to take it with you when you’re out and about on the weekends.

This isn’t the cheapest portable speaker, nor is it the smallest but getting down to it, the sound is very good and worth the money you’ll spend (AU$299.00) on the X4 from Blueant. If it’s sounding like a device you’re keen to pick up, then head to the Blueant website for details.

Blueant have not requested the return of the devices following review.