Buying BridgeBio Pharma On The Drop After Phase 3 Amyloidosis Failure 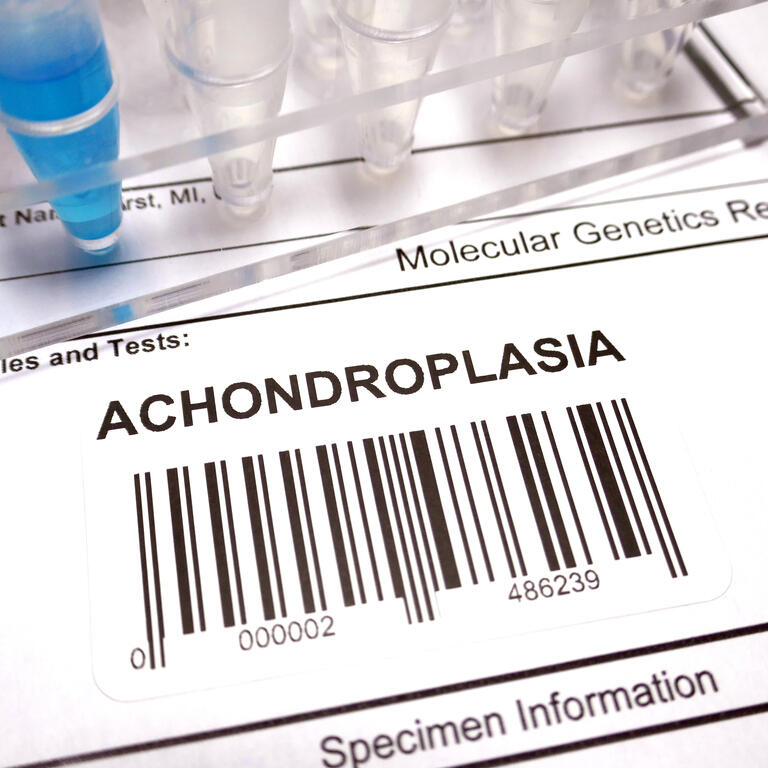 BridgeBio Pharma (BBIO) was founded in 2015 and is based in Palo Alto, California.

The company's stock dropped more than 70% earlier this week after a Phase 3 part A trial for its drug acoramidis failed to meet the primary endpoint of 6-minute walk distance (measuring exercise capacity) in symptomatic transthyretin amyloid cardiomyopathy (ATTR-CM). Several reasons have been discussed why this study failed, including enrollment of older patients, the treatment period of 12 months being not enough for cardiac function improvement, etc.

In the premium service, I had advised subscribers to avoid going long the stock ahead of this Phase 3 readout since 6-minute walk distance is a tough endpoint to meet (though the company claims that the drug slowed down the rate of functional decline expected in this disease but not statistically different from the placebo). Part B of this Phase 3 trial will study the effect of the drug on mortality at 30 months (data in 2023). Now that the stock is beaten down, I went long the stock today. In this article, I will provide the rationale for the bullish case for the company's stock. The key rationale for this investment is other product candidates in the pipeline with 2022-23 data readouts which investors seem to be discounting. In my assessment, I have not considered acoramidis since mortality is another tough end-point to meet and I am not convinced that the part B readout will be successful.

This form of hypoparathyroidism is caused by the gain of function variants in the calcium-sensing receptor, CASR gene. The current treatment includes calcium and vitamin D supplementation, which does not address the underlying cause of the disease. The target market is 12,000 individuals in the U.S. and approximately the same number in the E.U. and Japan.

BridgeBio's small molecule candidate Encaleret selectively antagonizes the CASR gene (thus targeting the cause of ADH1) and has FDA Fast Track designation in this disease. Phase 2b data this year showed normalization of blood calcium levels and 24-hour urine calcium excretion. Phase 3 registrations trial is expected to start in 2022 and the data could be released in the second half of 2023.

BridgeBio is the only company so far with a Fast Track designation in AD1, so there is no direct competition in this indication.

Achondroplasia is the most common cause of dwarfism. Its annual prevalence is approximately 55,000 cases in the U.S. and the E.U. It occurs due to a mutation in the gene for fibroblast growth factor receptor (FGFR3).

Infigratinib is an oral inhibitor of FGFR3 and the only potential treatment directly addressing the cause of the disease. Preclinical data in mice showed meaningful increases in skeletal length compared to untreated mice and a Phase 1 study showed safety and tolerability.

An open-label, multicenter Phase 2 (PROPEL) study is ongoing in children with age 3-11 years and achondroplasia. The primary endpoint is the change in annualized growth velocity from the baseline at 18 months. Initial data is expected in the first half of 2022.

Potential competition is from existing growth hormone therapies and BioMarin's (NASDAQ:BMRN) approved drug Vosoritide, which indirectly reduces FGFR3 activity by binding to natriuretic peptide receptor-B. However, there is no approved or in-development treatment that directly blocks FGFR3.

CAH is a genetic disease characterized by excessive androgen production and deficiency of mineralocorticoids. It is caused by mutations in a gene encoding for an enzyme called 21-hydroxylase. The current treatment approaches don't address the underlying cause of the disease and are aimed at reducing excess androgen production and replacing deficient steroid hormones. The target population is the classic form of the disease (more than 75,000 cases in the U.S. and the E.U. and 600 new cases per year).

BBP-631 is an AAV5 gene therapy candidate which is designed to provide a functional copy of the 21-hydroxylase-encoding gene. Preclinical studies in non-human primates showed dose-dependent high vector copy number and mRNA expression in the adrenal gland. It has Orphan drug designation and is in a Phase 1/2 trial (initial data expected in mid-2022).

The above 3 pipeline indications have the highest near-term revenue potential according to my calculations. In addition, the company has several other programs in genetic diseases and oncology which are summarized below. Among these indications, 2022 data readouts include Phase 1/2 data for BBP-812, AAV gene therapy in Canavan disease, Phase 2 data for BBP-418, oral ribitol replacement therapy in limb-girdle muscular dystrophy-2i, and BBP-711, oral glycolate oxidase inhibitor in primary hyperoxaluria.

The company's approved products are Truseltiq to treat cholangiocarcinoma, a form of bile duct cancer, and Nulibry to treat molybdenum cofactor deficiency, type A.

(BridgeBio pipeline, from the investor presentation)

The company has cash reserves of $800M (operating cash use of $364M for the first nine months this year). The management asserted earlier this week that the company is well-funded through the Part B Phase 3 TTR-CM readout in 2023, so investors should not be worried about dilution. Long-term debt is approximately $1.8 billion. At approximately 9% annual interest (the first tranche is due in 2027), I am not worried about the debt.

The current enterprise value of the company is $2.7 billion. From the above 3 key indications, the peak revenue potential is approximately $10 billion (U.S., E.U., and Japan). Using a mean of enterprise value/peak sales ratio of 7 (average for pharma/biotech industry), the stock could trade at $70 billion enterprise value in 2030 (assuming launch in 2025), or 25x gain potential. It could also be a takeover candidate in near future. 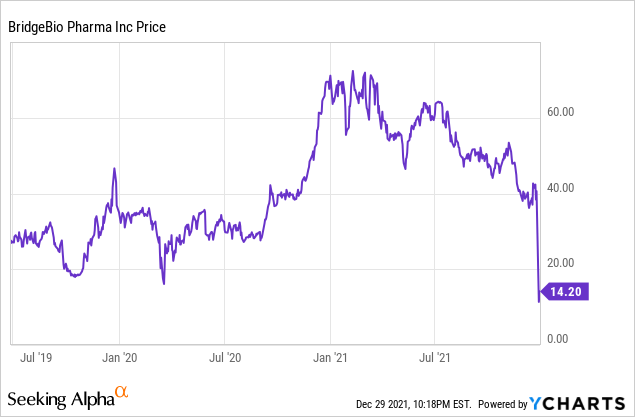 Risks in the investment include underwhelming data from the above indications, failure to meet study endpoints, unexpected side effects, capital raise before the part B TTR-CM trial data resulting in dilution, etc.

This article represents my own opinion and is not a substitute for professional investment advice. It does not represent a solicitation to buy or sell any security. Investors should do their own research and/or consult their financial advisor before making any investment.

Investing in equities, especially developmental stage biotech/pharma stocks has the risk of significant losses and may not be suitable for all investors. Investors should diversify their portfolios in at least 15-20 different holdings. While the sources of information and data in this article have been checked, their accuracy cannot be completely guaranteed.