Victoria Police are believed to be close to catching the person responsible for the disappearance and likely murders of missing campers Russell Hill and Carol Clay.

In a sign the mysterious killer, or killers, might be operating in the wild on borrowed time, Victorian Homicide Squad detectives will again hit television screens on Sunday to discuss the intriguing case.

Mr Hill, 74, and Ms Clay, 73, who were having a secret affair, haven't been seen since March 2020 when they went camping at the rugged Wonnangatta Valley, in the Victorian Alps.

Russell Hill (pictured, left) had been friendly with Carol Clay (right) for decades before they reportedly had an affair 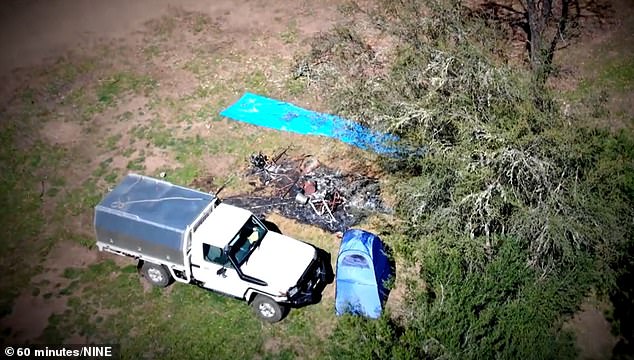 Police have been dogged in their ongoing investigation, but so far have failed to locate the pair - or any distinct signs of their possible remains 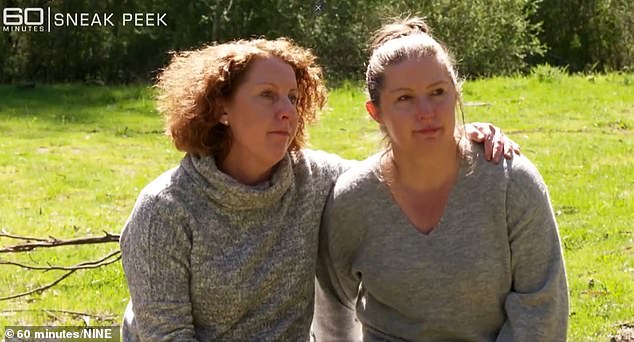 The families of Mr Hill and Mr Clay also visited the destroyed campsite of the couple, revealing their torment at not knowing what happened to the couple

Their disappearance made little more than regional news at the time as Australia was plunged into hard lockdown for the first time amid the Covid-19 pandemic.

Months later, their bizarre disappearance would not stray far from the headlines across Australia as snippets of information trickled in from Victoria Police.

On Sunday, the case will again be cast into the spotlight amid revelations police are 'on the verge of a breakthrough'.

Similar stories have emerged over the past year, with police releasing information on a mysterious 'Button Man', Mr Hill's missing drone, a suspicious white ute seen in the area and the recovery of two shovels.

The shovels had been found in thick bush off the Great Alpine Road on April 14 and brought the search for the missing couple to an abrupt halt.

Police have only just revealed those shovels could not be linked to the pair’s disappearance.

Last month Victoria Police put Mr Hill's daughters, Debbie and Colleen, in front of the cameras to talk to journalists about their missing dad.

Detective Inspector Andrew Stamper said he believed police were still in 'a very good position' to solve the case.

He had a 'theory' - one that he refused to elaborate on.

In an emotional television interview, the sisters said they believed their father to be dead.

'I really don't believe he could be alive, he wouldn't hide,' Debbie said.

'You just hope someone will speak up if they know something to help the situation ... We just want to know what happened and where he is.' 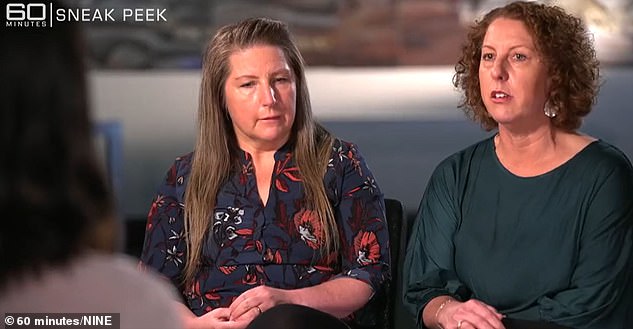 'I feel like there's always that little glimmer of hope he might come back,' Mr Hill's daughter told 60 Minutes 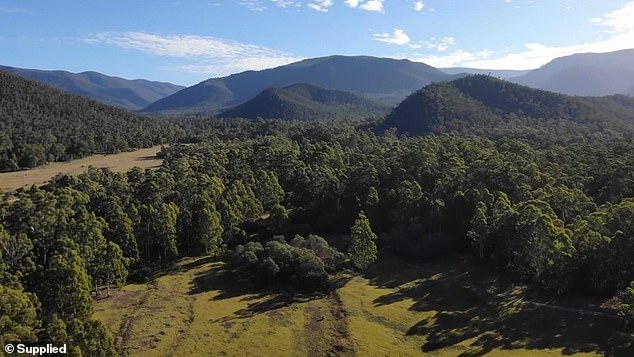 The area is notorious for blood-thirsty hunters illegally killing deer, who often use thermal imaging with their high-powered rifles to shoot at prey from as far away as 800 metres 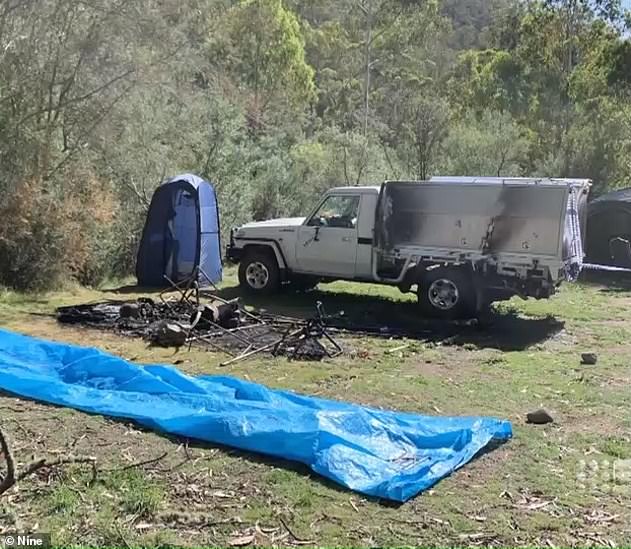 A new image of Mr Hill's white Toyota Landcruiser. It was found with minor fire damage at their burnt campsite near Dry River Creek Track in the valley on March 21

On Sunday night, Mr Hill's daughters will again put themselves in front of the cameras in the hope 'someone talks'.

It is the killers themselves police will be hoping do the talking.

Armchair detectives and followers of true crime podcasts or court reports will no doubt recognise the signs the heat is on.

A media frenzy has followed merely the television preview of Sunday's 60 Minutes report, which boasts police were 'honing in on new targets'.

The killer, his associates and anyone involved in the disappearance of the campers would be wise to be nervous.

Victoria Police has hardly been known for its engagement with media organisations while running homicide investigations.

Until, that is, those media organisations can work something to a case's advantage.

Many a crook has found themselves in custody in the days and weeks after police open-up on supposedly cold cases.

Sometimes police put out facefit images of crooks that appear to be lifted directly off a driver's licence.

A cynic might speculate they already know who that 'mystery' person is that they're looking for.

Russell Hill and Carol Clay were last heard from on March 20 last year, with Mr Hill's wife unaware he was travelling with another woman

Whatever the reality is, police maintain they are keen to speak to anyone who was in the area of Howitt Plains and Zeka Spur Track on March 19 or 20 last year, or in the Wonnangatta Valley between March 20 and 24.

Mr Hill left his home in Drouin, in Victoria's Gippsland region, on March 19 last year and collected Ms Clay from her home in the south eastern Melbourne suburb of Pakenham in his Toyota Land Cruiser.

They travelled through Licola, spending one night at Howitt High Plains before heading into Wonnangatta Valley where they vanished without a trace.

Mr Hill was last heard from on March 20 over the radio telling friends he was in Wonnangatta Valley, while Ms Clay had told friends she was heading away and was expecting to return by March 29.

Neither has accessed their bank accounts since their disappearance.

Two days after making their way to Wonnangatta Valley last March, their campsite was found burned to the ground.

A trail of clues left behind have led authorities to believe the pair might have been set upon by unknown attackers. 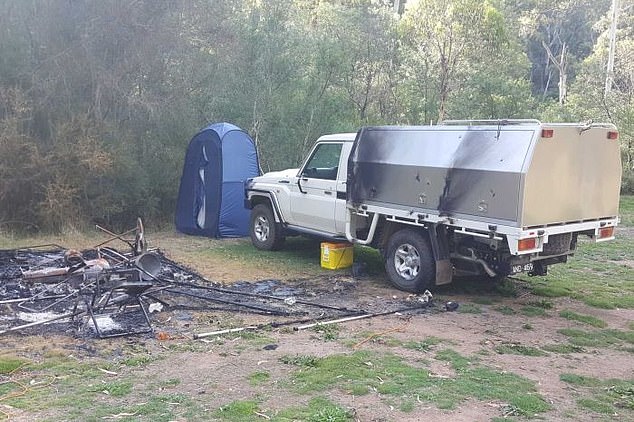 Mr Hill's white Toyota Landcruiser was found with minor fire damage at their burnt campsite near Dry River Creek Track in the valley on March 21, 2020

A mobile phone charger was initially believed to have set their campsite on fire and burned their tent, table and camping chairs.

The vehicle itself had also sustained damage in the fire, but was still able to be driven away from the scene.

In hindsight, perhaps it shouldn't have been.

Police had found it at the burnt out camp site with possessions belonging to the pair still inside the vehicle.

It was clear police could not work out why Mr Hill, an experienced bushman, abandoned his four-wheel drive utility when it was still able to be driven.

The focus was clearly on finding the campers.

By April 6, the search had been called off.

But almost a month after the pair vanished, specialised detectives from the Missing Persons Unit were called into action.

Detective Inspector Stamper has made it clear he will not rest until he brings those responsible for the crime to justice.

'We cannot leave any "what ifs" when it comes to an investigation like this,' he said in March.

In other words, he will finish the game.

On Sunday night, the master detective moves another step closer to checkmate.