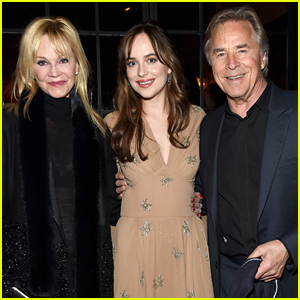 Dakota Johnson is opening up about the advice her parents gave her about going into acting.

In a new interview with W Magazine , Dakota revealed that Melanie and Don, who is currently starring in NBC’s Kenan, discouraged her from going into the family business.

“See how well that turned out?” she joked. “But I understood. They wanted me to have as much of a childhood as I could.”

Dakota added that she was very young when she decided she wanted to be an actor.

“Nothing old. Zero old,” she stated. “I couldn’t wait because I grew up on set.”

Dakota added, “My parents were always working with amazing artists, and I just loved it. I wanted to be a part of it so badly.”

Recently, Don opened up about what caused him to be booted from Dakota‘s last premiere.