Debt Doesn't Always Cause Divorce, but It's Often a Result of It According to a Debt.com and DivorceMag.com Survey

For many respondents, debts reached more than $5,000 – and their credit scores dropped by more than 50 points.

, /PRNewswire/ -- A third of divorced couples say money woes were a "primary factor" in the breakup of their marriages, but nearly two thirds took on debt after their divorces were final.

Those results – from a new survey by Debt.com and DivorceMag.com – were consistent across all income groups and all age brackets. More than half of respondents reported debts over $5,000. Almost 15 percent of those reported debts of more than $25,000. 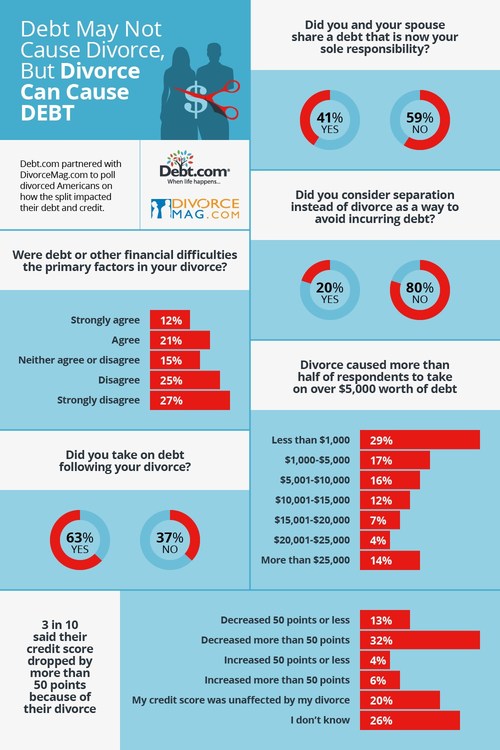 Debt.com and Divorce Magazine partnered to ask Americans how divorce impacts their finances. After surveying more than 500 divorcées, we’ve determined that debt and financial disagreements can certainly lead to unhappiness in marriage – but it’s not why most break their vows.

Also, remarkable was how divorce affects credit scores. Just over 32 percent of respondents said their credit scores dropped by more than 50 points – the most popular response. While another 13 percent saw a decrease of 50 points or less, fully 20 percent saw no change.

"Divorce can take such an emotional, mental, and financial toll that many people going through it don't think about ancillary issues such as credit scores," says Diana Shepherd (CDFA®), Divorce Magazine's Co-Founder and Editorial Director. "Unfortunately, you really need a high score post-divorce – to secure a new place to live, new credit cards, or even a new vehicle. A low credit score can mean higher interest rates, which will sap even more of your limited financial resources."

About: Debt.com is a resource that offers consumers education, self-help guides, professional solutions, and more. On Debt.com, consumers can find daily expert advice about money – how to make it, how to save it, and how to spend it. They also assist consumers by matching them with the perfect debt-solution company for their situation and making sure they are happy with the results. Debt.com has been featured in the Washington Post, Yahoo! Finance, Forbes, and more, making them a pillar of the debt relief industry.

About: DivorceMag.com has been empowering individuals and families who are considering divorce, separated, or divorced with information and support since 1996. We guide visitors through their legal, financial, and emotional needs via videos, podcasts, articles, and a directory of divorce professionals.