When she moved to the Twin Cities decades ago, Sharon Smith-Akinsanya joked that she thought white Minnesotans were obsessed with congregating at a singular cabin in the northern region of the state.

People kept saying “I’m heading north to the cabin,” and she’d wonder: “What is going on in this cabin, and why have I never been invited to it?”

It took her 15 years before she got her first invitation to visit a Minnesotan in their cabin up north. It was a prime example of the cultural stereotype of “Minnesota nice” for the CEO of Rae Mackenzie Group, a diversity, equity, and inclusion marketing firm.

The episode reveals, she notes, there’s more than a single cabin that Minnesotans retreat to. While she sees the humor in this story, the tale helps illustrate that many native and longtime Minnesotans need to broaden their networks, including to people of color, and how cultural norms can hinder progress in diversity, equity, and inclusion (DEI), within and beyond the workplace.

“We have to be intentional about making sure people feel welcome, included, and like they have a place where they belong, not only inside the workplace, but in our region,” Smith-Akinsanya says. 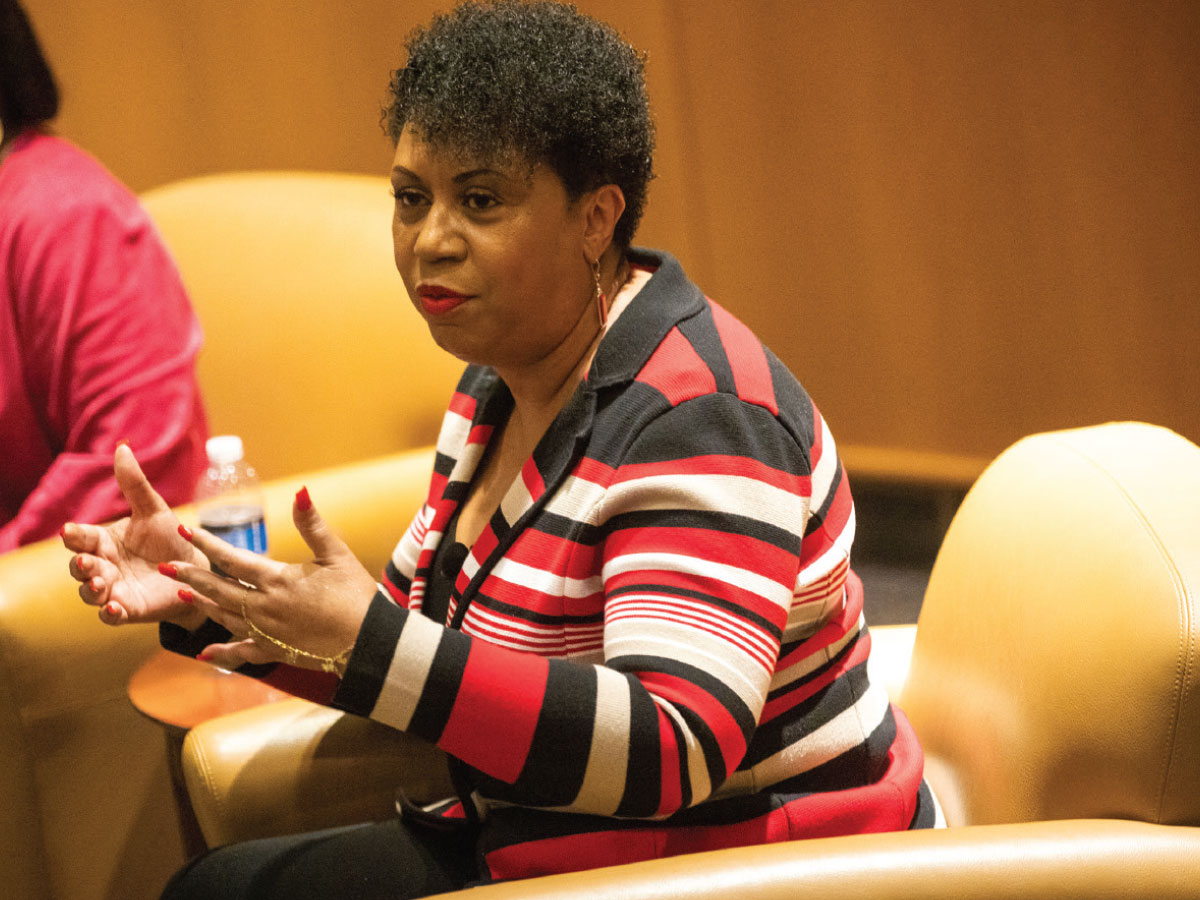 Twin Cities diversity advocates long have been striving to attract and retain BIPOC employees for large and small businesses. Their work became much more difficult after May 2020.

“It’s going to be tough to continually recruit top talent of color, especially Black professionals, to this region because now we are known all over the world as the place where George Floyd was murdered, and the place where Black people continue to be murdered at the hands of police officers,” Smith-Akinsanya says.

Corporations have recalibrated what it means to advance DEI efforts since Floyd’s death. Some have deepened their DEI programming, while others have made staffing commitments to ensure better advancement for BIPOC professionals. Many employers have hired diversity, equity, and inclusion officers, who emphasize that progress can only occur if leadership makes DEI a priority.

Founded in 1997, Smith-Akinsanya’s company was an early leader in DEI efforts. Rae Mackenzie Group helps Fortune 500 companies, CEOs, nonprofits, and other employers build meaningful relationships with people of color. Smith-Akinsanya notes that 75% of white people don’t have an authentic relationship with someone who doesn’t look like them.

“If you are the majority of society, you can go your whole life and not have those types of relationships,” she says, “but in 2022, it’s not OK.”

“If the answer is all of the same people who you’ve always connected with, and they all look like you, then we have an opportunity,” she says. “I’m asking CEOs to change that, to start to invite and include other people in that circle and put themselves in places and positions to create relationships with new people.”

First, leaders need to look in the mirror and “commit to the commitment to make a change,” she says.

After CEOs decide to show up, sponsor, and invest in diverse communities, they should seek experts, set goals, and execute those goals, she says, noting that DEI is in the interest of all parties involved.

The U.S. demographic shift from a majority white to a “majority-minority” population has been the subject of numerous news stories; most of the U.S. population is projected to  identify as people of color by 2040.

“Diversity, equity, and inclusion is no longer a nice-to-have. It is a business imperative if Minnesota corporations—or any corporation, for that matter—want to maintain their competitive edge,” Smith-Akinsanya says.

Read more from this issue

Research also shows that the Twin Cities ranks high among large metropolitan areas on overall employment, yet the unemployment rate for Minnesotans of color in recent years has been much higher than the rate for white residents. Unemployment rates among people of color are still two to four times that of their white counterparts, even as the state and nation are facing a massive employment shortage, Smith-Akinsanya says. “How can that be?” she asks.

Census data from 2018 found median income in Minneapolis was $83,000 for white families, compared with $36,000 for Black families—nearly 57 percent lower.

The one message Smith-Akinsanya wants to drive home is that DEI is not that complicated. It starts when leaders stop “hemming and hawing,” she says, and take action. “CEOs just have to decide to make it a priority. Like my mom always says, ‘Leadership matters.’ Our CEOs need to lead,” she says.

“It’s going to be tough to continually recruit top talent of color, especially Black professionals, to this region because now we are known all over the world as the place where George Floyd was murdered .”

Being first and best

While CEOs and business leaders are placing a higher priority on DEI, educators and community mentors are teaching underrepresented populations and professionals of color how to advance in corporations.

A buzz of excitement filled 3M Auditorium at the Carlson School of Management in mid-April as people of multiple races, ethnicities, and sexual orientations filed into the school’s inaugural Elevate Conference. The University of Minnesota event was targeted at underrepresented professionals who often don’t see people like themselves in corporate workspaces, which are often dominated by white men.

A week before she sat down for an interview with TCB , Smith-Akinsanya led a panel discussion at Carlson among three local Black DEI leaders. When she asked the audience: “A closed mouth doesn’t get what?” “Get fed,” the audience answered in unison.

The panelists discussed how professionals of color can build their personal brands, find sponsors, and create a personal “board of directors” for support and advice. All of these activities take work. The effort that’s required to succeed was linked to a common message from panelists: “To be the first, you have to be the best.” 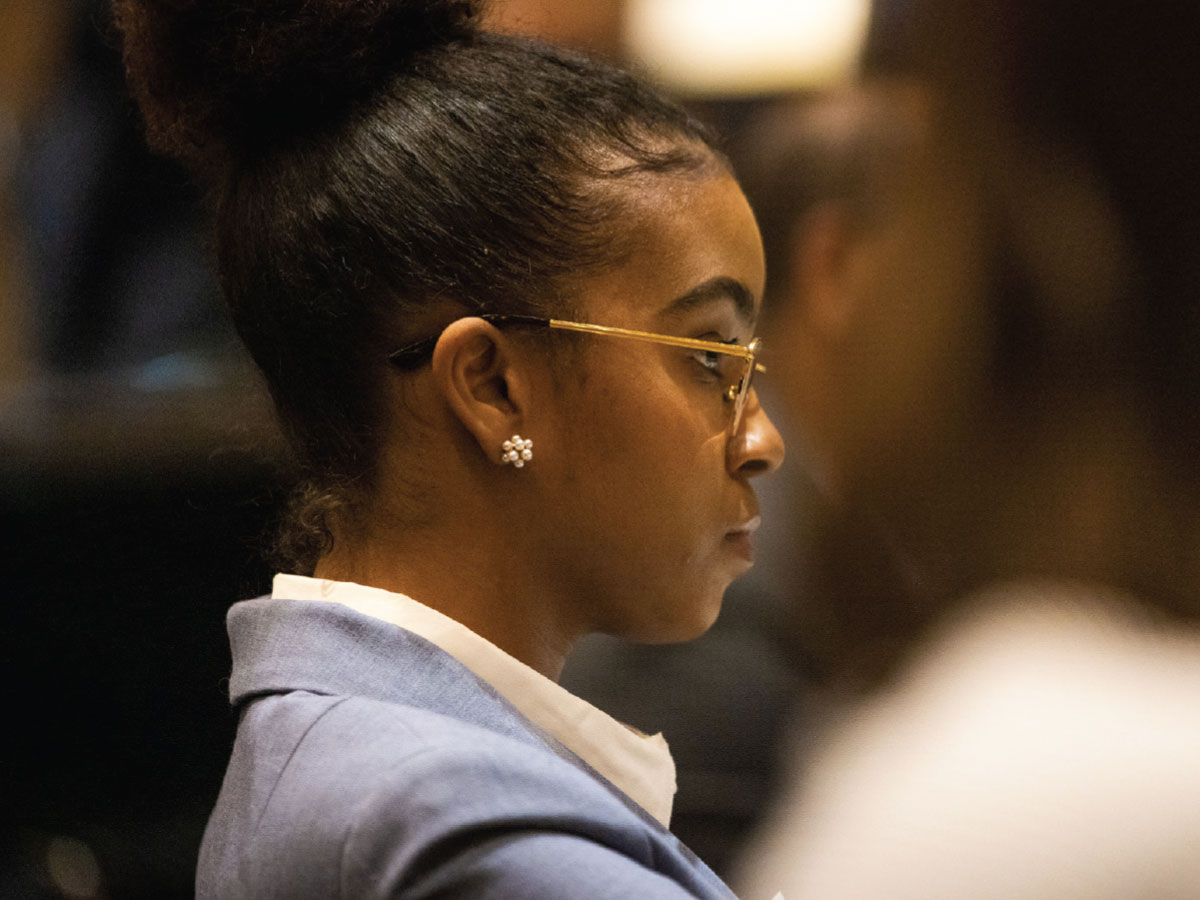 In the sea of eager young professionals of color at the conference, Mackenzie Jones stood out. She asked questions of the panel and introduced herself to fellow attendees.

A recent Baylor University graduate, Jones is applying to medical schools. Fighting for diversity, equity, and inclusion is part of why she wants to go into health care, noting disparities in social determinants and barriers that exist in medical care.

“It’s about the transformation of systems and how we can improve those resources for other people,” she says. “You see that in a business setting, and that’s why I want to translate my passion for public health and my passion for medicine into that as well.”

For Jones, it was exciting to be in a room where DEI was celebrated as a strength. “It’s been a slow process, but something is better than nothing,” she says. “It takes one person to be a catalyst for change.”

Carlson School dean Sri Zaheer says the conference was held partly to talk about how the university can be more inclusive and welcoming to people with a range of identities. But the school also hosted the event to reach a larger community, including alumni, local businesses, and nearby neighborhoods.

“It’s making sure that we provide opportunities, making sure businesses know how they can be better, and also giving professionals of color the skills and the confidence to advocate for themselves,” Zaheer says.

DEI strengthens communities and businesses, Zaheer says, noting that more than ever, companies need to leverage this strength by partnering with schools and universities to create pipelines for student success.

“Fundamentally for companies, it’s a talent issue—that we want to get the best talent in and we can’t leave anyone behind,” Zaheer says.

“It’s a collective responsibility that starts with K–12 through higher education through MBA, through [the companies’] own internal processes to make sure we are developing the talent that exists in all communities and people of all identities, then making sure that they’re then able to advance and able to take advantage of the opportunities out there,” she says.

This year, Carlson appointed its first senior diversity officer, Angela Spranger, who began her new role April 1. She’s also the founding director of a center at Carlson with the working title Center for DEI in Business. While the new center is still in its infancy, the goal is to use it as a hub for industry leaders to meet and recruit professionals of color.

Spranger spoke at the conference about becoming a change agent. “This is challenging work,” she says. “It is emotionally draining work sometimes. It can be overwhelming. It can feel like we are doing the work alone.”

No one is an expert in DEI, says Tracey Gibson, chief diversity officer for Andersen Corp., the Bayport-based manufacturer of windows and doors.

“It’s so complex and so broad, and we’re all coming in from different lived experiences,” she says. “It takes everyone to grow, to learn, and to build industry capabilities in this space.”

Gibson says Andersen already was working on DEI initiatives before she began her current role in 2020. CEO Jay Lund joined CEO Action for Diversity Inclusion, which now includes nearly 2,000 companies. They’re committed to having conversations about inclusivity and for ensuring strategies exist to combat bias in the workplace. Employee resource networks had started, providing a foundation that Gibson says she could build on.

“We have buy-in from the very top of the house. Our CEO has demonstrated that diversity, equity, and inclusion are important to the company,” she says.

Lund did so by making racial and ethnic diversity on the company board a priority. When Floyd was killed in 2020, Gibson says the CEO released multiple videos and other communications that emphasized that Andersen would become an anti-racist company. She notes it was imperative to set a baseline for where the company stood in the face of social unrest.

Andersen has made “pockets” of progress, she says. Because the company has so many different parts, progress must be measured from one branch to the next. For example, the production, management, and logistics branch began offering English classes for employees.

On the manufacturing and production floor, foot washing stations and prayer rooms have been built to accommodate a large Somali workforce, who are predominantly Muslim.

The company held listening sessions for employees when Asian hate crimes were happening across the nation, and it will partner with high schools to build a pipeline for students from diverse backgrounds to enter STEM fields.

Andersen Corp. was recognized by the Human Rights Campaign Foundation as one of the best places to work for LGBTQ+ equality, having earned 100 percent on the foundation’s 2022 Corporate Equality Index. The annual rating is a national benchmarking tool on corporate policies and practices related to lesbian, gay, bisexual, transgender, and queer employees.

Company recruiters are trained to work with LGBTQ+ employees and implement small system changes, including using preferred names in hiring and employment systems.

Recently, Andersen created guidebooks for transgender people beginning their transition while in the workplace. It also established a pro-trans community company stance.

“We really want employees to come in and be who they are,” Gibson says.