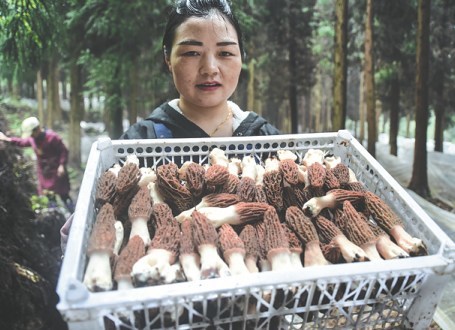 A farmer holds a basket of edible fungus ready for selling. [photo/China Daily]

As a key edible fungus demonstration zone in Guizhou province, Baiyun district in Guiyang city is integrating the industry with modern technologies and boosting the high-quality development of the entire industrial chain through a series of initiatives, said local officials.

The edible fungus in Baiyun is equipped with a full chain tracking management model from the production, cultivation, processing and certification to testing phases.

Liao Yiren, manager of Intelligent Fungus Cloud, an online platform for the entire industry chain of edible fungi, said based on cutting-edge technologies such as big data, the internet of things and artificial intelligence, the platform focuses on areas of production, planting, processing, supply and marketing, certification and testing.

Guizhou Jukong Technology is one of the enterprises on the platform. It has established the first intelligent base for rare edible fungi in Baiyun, which not only improves the standardization and automation of edible fungi production, but also the utilization rate of agricultural resources as well as easing the shortage of land resources.

Zou Liqin, 49, a local villager in Asuo village working at the edible fungus base, said she is thankful for the job. "Working eight hours a day, I can earn 4,000 yuan a month. It takes me five minutes to ride an electric bike from home. It is very convenient to take care of my children."

To date, the base has employed more than 50 local farmers.

Guizhou Zhongke Yinong Technology is another edible fungus processing enterprise in this area.

"This is a freeze-dried morel mushroom. Based on the base pre-harvest period and pre-production data provided by the platform, combining with the actual situation of the edible fungus entering the processing plant to its storage, we reasonably arrange the processing time and processing quantity, and implement planned processing," said Zhang Ke, chairman of the company.

"We use the processing workshop module to provide standardized production parameters to ensure that downstream companies' requirements for the production standards of primary processed products are met.

"At the same time, we have gradually formed our own standardized production system. The data and videos of the processing workshop make the processing steps more transparent and help with standardization," he added.

In the Guizhou Mushroom Museum, visitors can understand all the information about the entire industrial chain process of the products from rod making, cultivation and processing to sales.

They can also use blockchain technology to ensure the safety and reliability of information and data, and help producers build trust in quality and safety assurance.

Last year is the first year of the implementation of the 14th Five-Year Plan period (2021-25) and a crucial year for comprehensively promoting rural revitalization.

Guiyang will strive to make new breakthroughs in rural revitalization and make positive contributions to the construction of a vibrant Guizhou. On Sept 26, Hu Zhongxiong, a member of the Standing Committee of the Guizhou Provincial Party Committee and Party secretary of Guiyang, presided over a special meeting on agricultural modernization in Guiyang. He said that it is necessary to stabilize the basic agricultural market.

Guiyang's economic growth has increased by 284.3 percent in the past 10 years. In 2020, there are more than 5,000 big data companies in Guiyang and the added value of the digital economy exceeded 160 billion yuan, accounting for more than 38 percent of the region's GDP.

"Big data has become an important engine for Guiyang's high-quality development, allowing Guiyang to stand at the forefront of the world to showcase its beauty to all," said Ma Ningyu, deputy Party secretary and acting mayor of Guiyang.

"At present, Guiyang is promoting the deep integration of big data and rural revitalization," Ma said.