Farmer Mac And MGIC Trade Like Banks But They're Better Than Banks, Buy Them 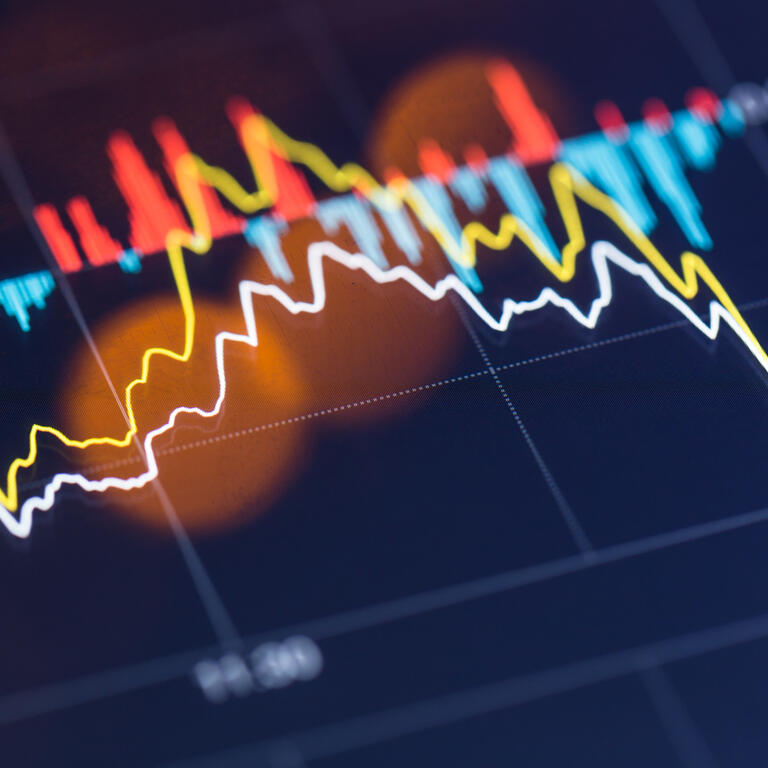 You know, people, it’s just hurtful. Even though I worked on Wall Street, I’ve got feelings too.

I’ve recommended you buy Farmer Mac (AGM) and MGIC (MTG) for several years now. I’ve written 14 articles on Farmer Mac, most recently on November 10, explaining their unique strengths. And I’ve written a whopping 33 articles on MGIC and its private mortgage insurance – PMI – companies, most recently on November 12. I’ve detailed their niche business models, industry dynamics, earnings, risks, you name it. Yet this is how they’ve traded over the past year. First MGIC: 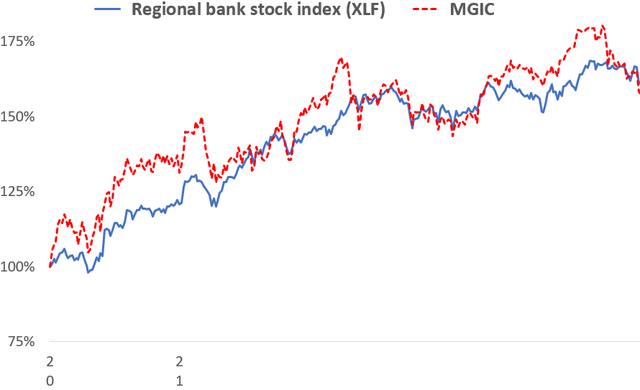 MGIC trades almost identically to a regional bank! For you statistics geeks, the R² was a remarkably close 89%.

And Farmer Mac? The same story: 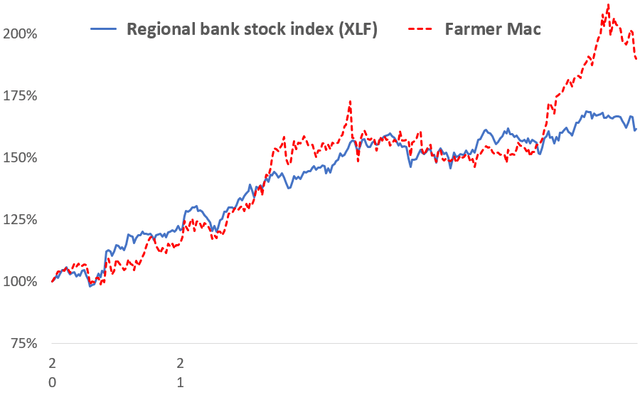 Except for a recent bump, Farmer Mac apparently investors also view it as a regional bank if you scrape the mud off its shoes. Its R² is a nearly identical 86%.

Do Farmer Mac and MGIC have similar growth and risk characteristics and valuations as regional banks, as investors seem to imply? No, they don’t. And in this environment, the differences work to Farmer Mac and MGIC’s advantage. So think outside the box and buy some AGM and MTG. When other investors wake up, you will be very happy you did.

I argue in this article that Farmer Mac and MGIC differ materially from banks in three important ways: 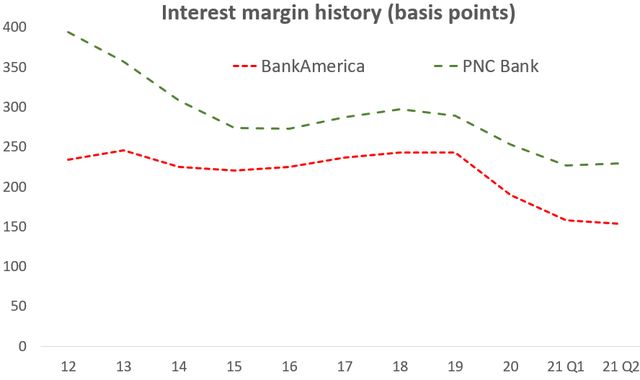 The chart shows a substantial narrowing of the interest margins of both banks since ’20. The reason is that the 0% fed funds rate since COVID broke out has made deposits expensive. As a result, returns on equity (ROE) for banks are historically low - 10% for PNC this year-to-date and 11% for Bank of America (adjusted for COVID loss provisioning). And they could stay low. Going forward, the Fed now claims that it will soon stop buying bonds and will start raising the fed funds rate to an undetermined level. That runs the risk of flattening the yield curve, which also narrows bank interest margins. 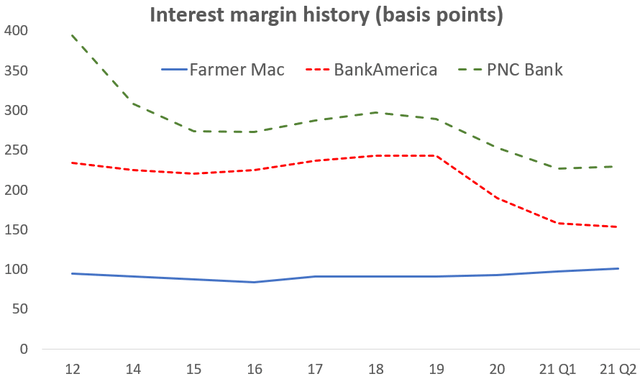 Not only is Farmer Mac’s interest margin far more stable, it even has a slight upward bias! The reason is that Farmer Mac’s implied government guarantee on its debt allows it to borrow more cheaply than banks, and management uses some of the extra income to hedge against interest rate risk in ways that banks can’t afford to.

You are doubtless now asking why Farmer Mac’s interest margin is so much lower than the banks. Because it makes very low credit risk loans (no credit losses since COVID!), and therefore is required to hold far less capital than banks. As a result, Farmer Mac’s ROE this year-to-date is 16%, about 50% higher than PNC and BofA. Farmer Mac has more stable and higher earnings. Interesting, huh?

Wrong. The fact is that when a homeowner with PMI refis, a new PMI policy is generally needed on the new mortgage. For example, let’s take a look at Essent’s (NYSE:ESNT) Q2 ‘21 insurance in force. Payoffs were at a whopping 38% annualized because of low rates and a refi boom, double or more than a normal payoff rate. Not only did Essent avoid insurance in force shrinkage, it actually grew by 13% annualized, well faster than overall mortgage debt growth.

Net/net, the PMIs have minimal interest rate risk. Yet they often trade as rate plays.

Banking is normally pretty competitive; just think about all the different bank branches in your area. Then add in all the non-bank competitors that you’ve historically seen, like Fannie Mae (OTCQB:FNMA), American Express (NYSE:AXP), etc. Now add in the wave of fintech companies coming on board, all with huge growth plans – SoFi (NASDAQ:SOFI), Affirm (NASDAQ:AFRM), Robinhood (NASDAQ:HOOD), Varo Money, Upstart (NASDAQ:UPST), Rocket Mortgage (NYSE:RKT), Venmo (NASDAQ:PYPL), etc., etc., etc. PitchBook says that fintech raised $244 billion of venture and public capital just through the first 9 months of this year. They are competing for depositors, consumer and business borrowers, payment processing, investors and other customers. And of course, fintechs don’t need to earn money, so they generally are fierce price competitors. It seems reasonable to assume that bank profit margins will get squeezed over the next few years.

Farmer Mac is in a great competitive position. First, it has the implied guarantee of the U.S. government on its debt, so Farmer Mac can usually be the farm mortgage price leader. Second, farm mortgages are very much an unsexy niche product. No fintechs are talking about their farm mortgage strategy.

PMIs are also in good competitive shape. Only six companies offer private mortgage insurance, or PMI. A few PMIs went bust during the ’08-’12 housing bust and a few arose to take their place, but the number of competitors has been stable at 6-7 for decades. Again, no fintechs I am aware of are sniffing around the PMI space. Not a big sexy TAM to brag about.

Here are the current P/Es on ’22 analyst expected EPS (from Seeking Alpha) for a sample of banks and PMIs, and Freddie Mac:

Notice anything? Me too. The PMIs and Farmer Mac are trading at far lower P/E ratios than banks. With less interest rate risk. And less competitive risk. Yes, banks and the PMIs/Farmer Mac have other differences, like growth prospects and credit risk, but in my view nothing material enough to explain the low valuations. So give yourself a future Christmas present and buy some Farmer Mac. Or a PMI – MGIC, Radian (RDN), Essent and/or National Mortgage (NMIH).

This article was written by

Gary Gordon’s career was on Wall Street, where he was a stock analyst covering the housing, mortgage and consumer finance industries. He also served as a U.S. investment strategist and as a portfolio manager. The bulk of his work career was at PaineWebber and UBS. He is now retired. Mr. Gordon is an adjunct professor at Mercy College in New York. He teaches economics on campus and math at prisons (Sing Sing and Taconic in New York). He also presents financial literacy seminars to adults and students. He is on the Board of Hudson Link (college education for incarcerated men and women) and the Baron de Hirsch Fund. Mr. Gordon is married with two young adult children. He has degrees from Colgate University (BA '74, philosophy) and The Wharton School (MBA '77, finance).

Disclosure: I/we have a beneficial long position in the shares of NMIH, AGM, MTG, ESNT, RDN either through stock ownership, options, or other derivatives. I wrote this article myself, and it expresses my own opinions. I am not receiving compensation for it (other than from Seeking Alpha). I have no business relationship with any company whose stock is mentioned in this article.