Hello Kitty makes its debut on Roblox with a restaurant game

GamesBeat Summit 2022 returns with its largest event for leaders in gaming on April 26-28th. Reserve your spot here!

Hello Kitty is the latest brand to make a debut on Roblox with a game designed for the platform’s 55 million daily active users.

Sanrio is launching its first Hello Kitty Cafe game, based on the real cafes that have opened in places like Las Vegas, Irvine, California, and cities in Asia.

“We’re super excited about this,” said Craig Takiguchi, chief operating officer and head of business development at Sanrio, in an interview with GamesBeat. “It’s probably the first major digital announcement that will help set the stage for our broader narrative online.”

Sanrio has run the Hello Kitty brand for more than 60 years and it now has more than 400 characters. Now it is partnering with Roblox as it tests the waters of the metaverse, the universe of virtual worlds that are all interconnected, like in novels such as  Snow Crash  and  Ready Player One . Most visions of the metaverse have hardcore sci-fi characters, but I suppose Hello Kitty characters are just as welcome, especially on a youth-oriented platform like Roblox.

Sanrio is investing a majority of its marketing resources into developing age-appropriate games, content, platforms and ecommerce that will reach new users and create new experiences for consumers of all ages. 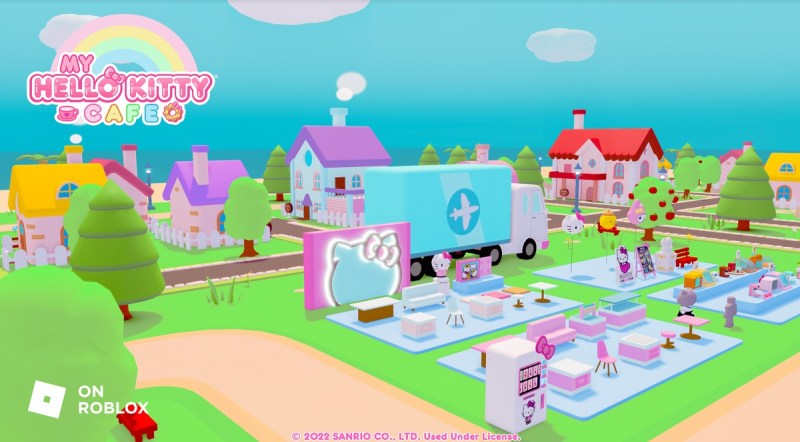 Some recent examples include a Hello Kitty integration with Toca Boca, launched in December, for younger demographics and Razer for older audiences, followed by several high-profile partnerships in the coming months.

Hello Kitty was brought to the world through products that first appeared on coin purses, then plush dolls became very popular. And then it made its way to erasers, pencil cases, and all kinds of accessories.

“It was really left to the consumer to create that world among themselves,” Takiguchi said. “We did many iterations in the physical world, but I think the digital world will allow them to go much deeper. Self-expression is kind of limited in the physical world. Now we can go deeper engagements. So imagine having worlds or games where kids can participate in play with Hello Kitty and really get a chance to have some affinity with them in a way that gives them a deeper emotional connection.”

Hello Kitty will also be part of an original multiplayer game that is being built from scratch. But that will be coming later on. The Hello Kitty Cafe on Roblox has been in the works for a couple of years.

“What we plan to do is have a safe environment so that people can interact and we can bring build communities together,” Takiguchi said. “This is our first step. Our goal internally is to reach over a billion gamers and viewers by 2025.” 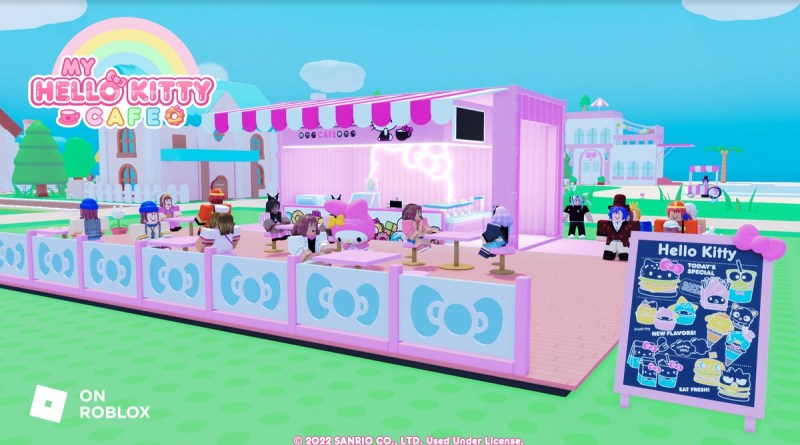 The Hello Kitty Cafe in Roblox.

Sanrio worked with Rock Panda Games to develop the game for Roblox, and Sanrio itself worked on a lot of the narrative for the game.

The game is a simulation role-playing game, where the gameplay revolves around a main town where players will be able to manage their own truck and pop-up cafe. They can progress to a more sophisticated cafe and recruit their favorite characters from Hello Kitty. Those characters will help them run their cafes, and those characters are part of an ongoing “gacha” collection system. The whole experience is kind of like a Diner Dash experience, where you’re trying to get a lot of tasks done to keep customers happy in a cafe.

The players level up by greeting and seating the customers and taking filling orders, just like a real cafe. And when they do level up, they will earn Robux currency. And that will allow them to purchase new items and hire new staff. The game is designed to keep players coming back.

“The more they progress, the more they will unlock,” Takiguchi said. “They can add new recipes, decor, cafe extensions, and more.”

Takiguchi believes some online and offline collaboration will bring the physical and digital worlds of the cafes together.

“We were really trying to figure out the genre first and then the right developer,” Takiguchi said.

But making something for Roblox isn’t the only metaverse strategy happening at Sanrio. The company is exploring web 3 investments and other ways it can work authentically on other platforms. And over time, the company hopes to have its own kind of metaverse with the upcoming multiplayer game.

“We’re excited about that aspect, going deeper into social connections,” he said.

Going where the fans are 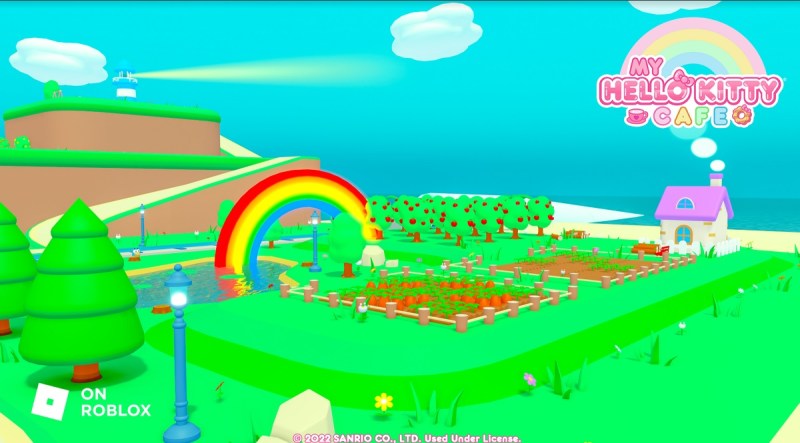 Of course, Sanrio’s brands and characters can be seen in various places on Roblox already, but not in an official licensed capacity. In those cases, the user-generated content has been created by fans of the brands without official permission.

Now Sanrio can actually participate in the revenues generated by Hello Kitty on the platform through an official game.

“We thought that by having so much momentum with cafes offline that we can bring that audience onto the digital world,” Takiguchi said.”We feel very confident with just North America alone and our social media fan base, we can bring an audience to them.”

Sanrio will probably do other kinds of collaborations, but Roblox has had such strong growth that it makes sense to target the platform early in the brand’s plans.

“This would be the first major platform game that we’re bringing to the market, but in the next 12 to 18 months we’ll be launching some other programs too in the center of the metaverse.”

Brands and the metaverse 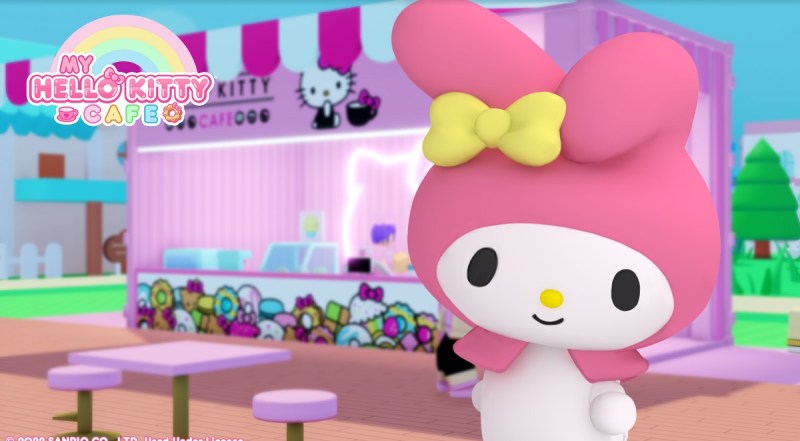 Lots of brands are thinking about the metaverse. We’ve got a session on user-generated content on Roblox with Gamefam and a discussion of brands and the metaverse with Admix at our GamesBeat Summit 2022 event.

“You can get much closer to the audience as the digital world solves a lot for Sanrio,” said Takiguchi. “We’re putting a lot of effort on this. When we went to product licensing and we went deep into it, we really lost control of our customers. We use licensees mainly because we can get access to a lot of different categories of products very quickly.”

By contrast, the metaverse allows Sanrio to have more control over what happens with the brand and the characters, as opposed to licensing the characters for physical products.

“This allows us to do is get closer to the audience and allows us to create a deep emotional connection with the characters and allows us to engage directly with them,” he said. “Our hope, then, is to really use this to drive the brands instead of products. And when we’re successful here, then there is an aftermarket.”

This kind of effort with Roblox means that Sanrio is going after the digital natives, the kids who grew up with tablets and smartphones, as well as their parents.

“We think this can serve to kind of bring the two generations together in ways that that can be very meaningful, and hopefully use that as a platform to cross-generationally build relationships again,” Takiguchi said. “That’s about friendship, kindness, inclusivity, and using our characters to show that everyone has a place in the world.”

As for things like blockchain, the company isn’t diving in just yet as a lot of consolidation and sorting out needs to happen there, and most of the non-fungible tokens (NFTs) so far don’t have much utility.

“We don’t have to be an early adopter as we want to get access to the largest audience possible,” said Takiguchi.

GamesBeat's creed when covering the game industry is "where passion meets business." What does this mean? We want to tell you how the news matters to you -- not just as a decision-maker at a game studio, but also as a fan of games. Whether you read our articles, listen to our podcasts, or watch our videos, GamesBeat will help you learn about the industry and enjoy engaging with it. Learn more about membership.