In Kyoto, traditional Japanese candles and tops get Hanukkah spin

JTA — Soon after Rabbi Moti Grumach moved to Kyoto, Japan about three years ago to serve as an emissary there for the Chabad-Lubavitch movement, he realized that a local craft dovetailed neatly with Jewish traditions.

Warosoku, or candles made from the fruit of the haze tree — or Japanese sumac, sometimes called the wax tree — are a longtime Kyoto speciality, dating back centuries. Made entirely of vegetable products and a washi paper wick, warosoku tend to produce softer light and less smoke than the wax-and-cotton-wick candles used in the West.

A Japanese member of his community told Grumach about Nakamura Rousoku, a 125-year-old Kyoto company that still makes each candle by hand, and he realized they would be a nice addition to Hanukkah celebrations at his Chabad House, one of four in Japan.

Now, the company, which has struggled during the pandemic, has designed candles especially for the local Jewish community, using Hanukkah colors and messages. And Grumach is working with them and other local artisans to export their work for use in Hanukkah celebrations worldwide.

“When we are here in Japan, we not only focus on the Jewish community, but what we give to the local Japanese community,” he said. “How we can help, and how we can give them more strength.”

Japan has a long tradition of using specially-designed candles as ceremonial gifts, according to Hirokazu Tagawa, CEO of Nakamura Rousoku. Beginning in the Edo era (1603-1868), guests would give custom candles to the shogun, the military dictators appointed by the emperor. Tagawa himself sent candles to the city of Kobe after an earthquake there killed more than 6,000 people in 1995.

Candles are also traditionally used to light Buddhist or Shinto altars, or at funerals and memorial events.

“Using fire is common among all cultures, a kind of universal thing. So beyond the difference of religions and cultures, lighting the world, and using candles, is a very nice thing,” Tagawa said.

Despite their occasional religious use in Japan, warosoku are still acceptable for use in Hanukkah menorahs, Grumach said, since they are not specifically dedicated for worshiping idols — something forbidden in Judaism — and can be used for a variety of purposes. 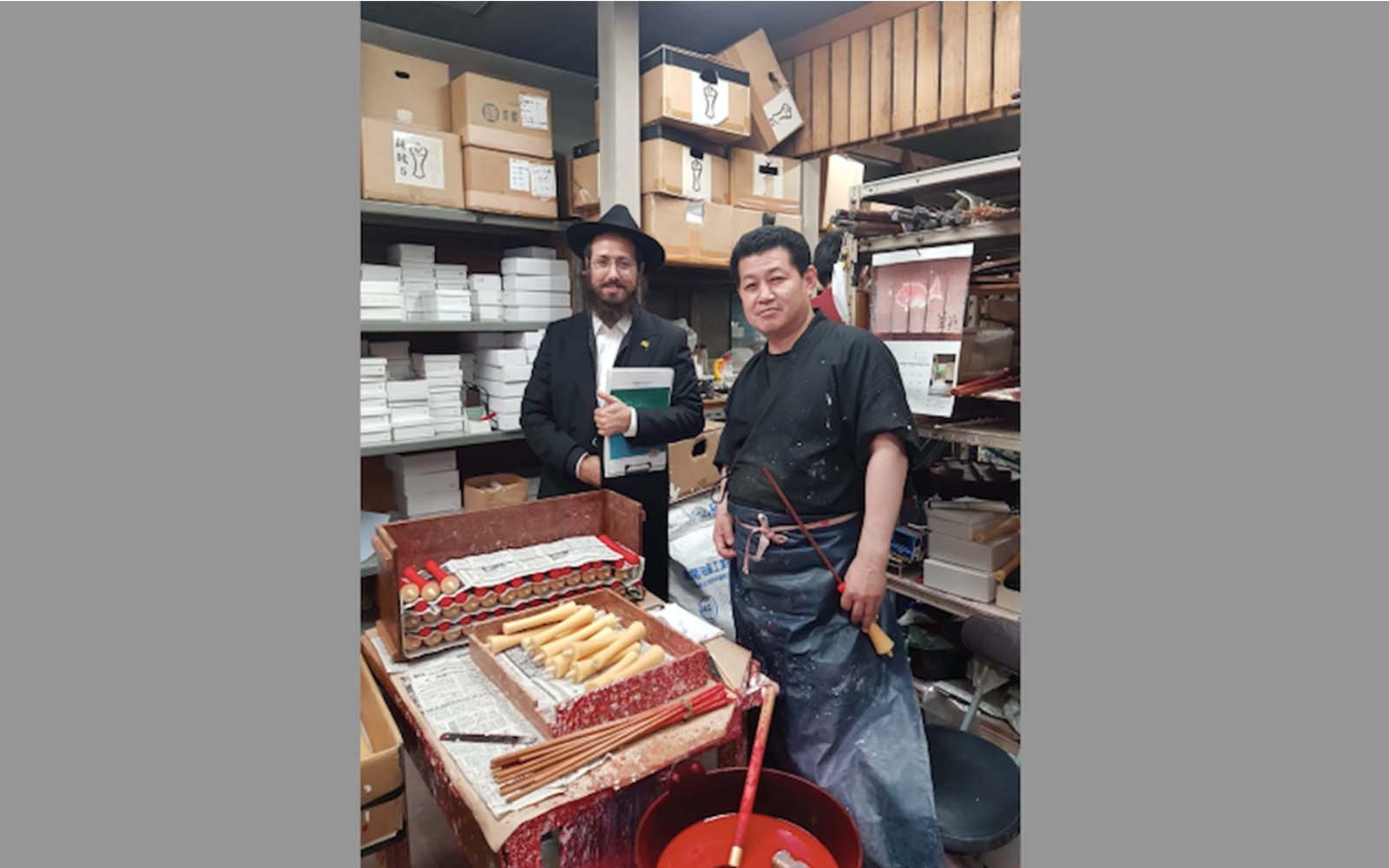 Grumach has become something of a salesman for the candles, showing them off to Israeli embassy officials in the past. During the Olympics this summer, the Israeli embassy used candles from Nakamura Rousoku to memorialize the 11 Israeli athletes killed in the 1972 Munich Olympics.

Grumach’s advocacy is a boon for the candle company at a time when the pandemic has driven sales down by 70 percent.

Grumach said Chabad of Japan has been working to help Takawa’s business by going beyond the population of only around 1,000 Jews in Japan, and selling the candles to Jewish communities around the world at Judaica stores in the United States and Israel.

He’s also trying to boost the flagging sales of other local artisans who create a traditional Japanese spinning top called a koma.

Koma, which are made by rolling up long, thin strips of kimono fabric, are typically used during new year festivals. But they have an obvious application at Hanukkah because of their resemblance to dreidels.

At Grumach’s urging, a small shop in Kyoto produced a koma decorated with menorahs, gold coins and sufganiyot, doughnuts eaten during Hanukkah. The experience, he said, underscored the potential that arises from making connections in the local community.

The artist who designed the Hanukkah koma “didn’t have any idea about Judaism,” Grumach said. “When we told them the Jewish people have their own holiday with this koma, they were really excited.”