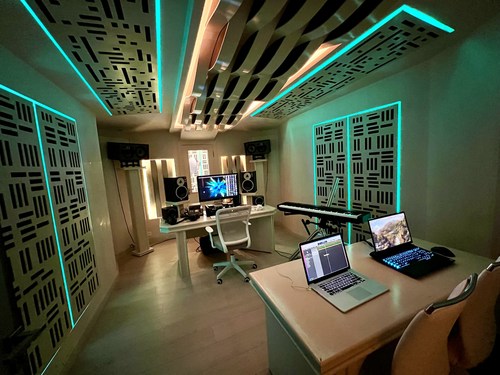 JayVibe Studios Miami - one of the control rooms and its studio.

Besides audio/video services, the studios provide online marketing for artists by giving fans access into the recording sessions through streaming videos. "The whole idea is to allow a super-fan to virtually attend the recording process or exclusive pre-launch listening sessions" explains Elam Jay, Producer, Director and JayVibe Records CEO.

The entirely self-made man, founded JayVibe Records in 2018, aiming to help other young talents, rich their own dreams. His choice to implement the recording studios in Miami, in a secured industrial area, along with other famous recording studios, was influenced by the impact that the Covid pandemic had over the city: massive migration of the music industry's professionals came here to stay.

Elam Jay debuted in the music industry, by signing a recording contract with Sony Music in 1996. With his international experience as a writer, composer and arranger for several artists in markets such as France, Morocco, Turkey or USA, he established himself in the industry as an eclectic producer.

In 2004 he owned the Universal Music licensee for the Moroccan territory, and founded a music label being a pioneer in the business in that region. Same year, Elam Jay was the first artist to be Coca Cola's spokesman for their North Africa and Middle East territories campaign.

Not only does JayVibe Studios Miami boast having such an accomplished producer leading the team, it also provides access to some of the most sought after musical instruments, amplifiers and recording equipments.

Along with all the professionalism and experience expected in the creation of great sounding music, JayVibe Studios Miami promises a comfortable time spent within its contemporary designed spaces, offering also 3 bedrooms for naps, kitchen and bathrooms to resource the long recording sessions.

JayVibe Studios Miami is excited to start its mission of capturing exceptional performances for artists at any level, and share an ever-expanding world community.