Manhattan's New DA Is Protecting Criminals Instead of Their Victims | Opinion

We've all heard the saying: "The road to hell is paved with good intentions." But can we still call the intentions good when we've been down the road, seen where it leads, and continue to lay faulty paving?

This is the case with the direction Alvin Bragg, Manhattan's new district attorney, is taking in his approach to crime. In a memo sent just days after being sworn in, Bragg made it clear how his office would—or would not, as the case may be—handle crime in New York City. The DA's office "will not seek a carceral sentence" except in cases of homicide, domestic violence felonies, some sex crimes and public corruption. Not only is Bragg's plan to avoid prosecuting certain crimes, but he specifically instructs prosecutors to reduce charges. "Armed robbers who use guns or other deadly weapons to stick up stores and other businesses will be prosecuted only for petty larceny, a misdemeanor, provided no victims were seriously injured and there's no 'genuine risk of physical harm' to anyone," the memo reads. Burglary, possession of a weapon (including by those with previous convictions), resisting arrest, and drug offenses should all be pursued with a charge reduction mentality.

"These policy changes not only will, in and of themselves, make us safer; they also will free up prosecutorial resources to focus on violent crime," Bragg claims.

And yet, that is a baffling sentiment coming from someone tasked to uphold the law. How does this advance the public interest?

We can believe DA Bragg's intentions are good while also not ignoring the truth: We know how this will end.

In the last two years, we've seen cities across the nation devolve into chaos. While many factors are to blame, the lack of accountability and refusal to charge perpetrators of crime is the primary reason the problem persists. While violent crime should be our primary focus—ten of the country's most populous cities set homicide records last year—ignoring other crimes causes a decline in the quality of life of citizens. Because the truth is, homicides don't happen in a vacuum. When these crimes persist, cities change. The community, the economy, the quality of life of the most vulnerable, these things begin to erode and disappear. 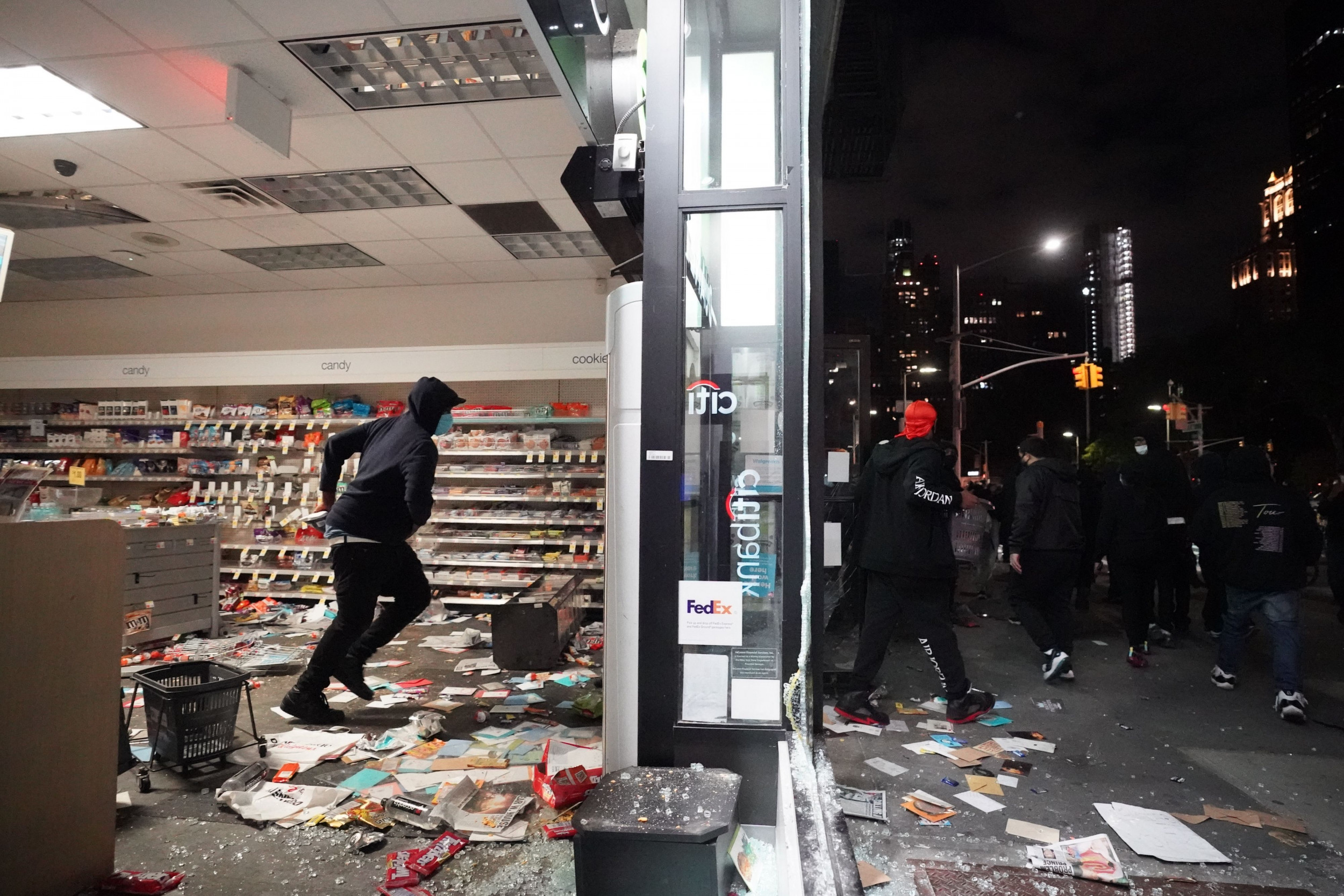 People loot a store during demonstrations over the death of George Floyd by a Minneapolis police officer on June 1, 2020 in New York. - New York's mayor Bill de Blasio today declared a city curfew from 11:00 pm to 5:00 am, as sometimes violent anti-racism protests roil communities nationwide. Saying that "we support peaceful protest," De Blasio tweeted he had made the decision in consultation with the state's governor Andrew Cuomo, following the lead of many large US cities that instituted curfews in a bid to clamp down on violence and looting. BRYAN R. SMITH/AFP via Getty Images

Take California's Prop 47, a well-intended law looking to reduce prison populations by reducing the penalty of certain crimes to a misdemeanor from a felony. The proposition passed in 2014, but in one year, many cities saw double digit increases in the crimes affected by the law. Proponents hear these stats and say it is for the greater good. They only see these crimes as crimes of property loss.

But that's not the entire story. For instance, it should be obvious what a gang member would do with an illegal firearm. And yet, in Palm Springs, a known gang member was given a citation when caught with a stolen gun because it was only valued at $625.

Fast forward a few years and Walgreens has closed several stores due to out-of-control theft. The closures represent lost tax revenue, lost jobs, and an additional burden on those who have lost the convenience of an important neighborhood business.

The question for Manhattan's new district attorney is, "Who are these changes really designed to benefit?"

Critics accuse prosecutors like Kim Foxx in Chicago, Gascon in LA, and now Bragg of being soft on crime. But what they really are is hard on citizens. When you decide on behalf of the residents of your city that having a gun pointed at them making them fear for their lives is "not a risk of harm," or that forcing them to walk through an open-air drug market to get to school is of no concern, this highlights a larger problem. Criminal justice reformers have seen injustices happen and, rightly, look for ways to improve conditions. But in their overcorrection, they are pushing us to a place where there is more concern for criminals than there is for the citizens they victimize.

Bragg told his ADAs to evaluate each person arrested and identify those who "suffer from mental illness, who are unhoused, who commit crimes of poverty, or who suffer from substance use disorders." "Charges should be brought consistent with the goal of providing services to such individuals," Bragg instructed.

Having compassion for criminals is all well and good, but in this case, the compassion seems to be reserved solely for the criminals. Shouldn't the goal of these services be targeted to law-abiding citizens?

Finally, Bragg says that we need to consider the impacts of incarceration on people convicted of crimes. This is true, but he must understand that there is also an impact to be born from not incarcerating people.

Bragg's proposals are the opposite of what someone would do if they were trying to quell crime, an issue on which the new mayor, Eric Adams, campaigned. How will Mayor Adams make the streets of New York safe when the Manhattan DA's priority is not public safety?

People need to speak up now before things get worse. The idea that we should only prosecute violent crime will only serve to continue the city's decay while we wait for repeat offenders to commit a violent act.

If you don't address criminals when they are caught with a weapon, you'll have to do so after they use it. The city would be better served if Bragg took a lesson from the other cities whose mayors are waking up to the realization that ignoring crime, of all kinds, emboldens criminals and makes cities less safe.

Charles Love is the executive director of Seeking Educational Excellence, host of The Charles Love Show, and the author of the upcoming book Race Crazy: BLM, 1619, and the Progressive Racism Movement.

The views in this article are the writer's own.