Australia’s deputy prime minister, Richard Marles, has had a “frank” hour-long discussion with China’s defence minister in Singapore, marking the highest level in-person contact between the countries in almost three years. Marles, also the defence minister, said he raised the controversial interception of an Australian aircraft by a Chinese jet last month and broader issues in the Pacific with China’s minister of national defence, Wei Fenghe, during a meeting on the sidelines of the Shangri-La Dialogue ministerial conference in Singapore. The event is notable because China has not allowed phone calls or meetings between Australian ministers and their direct counterparts since early 2020.

US senators have reached a bipartisan gun control deal after recent mass shootings. The proposal is a modest breakthrough, offering measured gun curbs while bolstering efforts to improve school safety and mental health programs, but falling far short of tougher steps long sought by Joe Biden, many Democrats, gun reform advocates and America citizens. For example, there is no proposal to ban assault weapons, as activists had wanted, or to increase from 18 to 21 the age required to buy them. Even so, if the accord leads to the enactment of legislation, it would signal a turn from years of gun massacres that have yielded little but stalemate in Congress.

The House select committee investigating the Capitol attack revealed at its inaugural hearing that Donald Trump’s top Republican allies in Congress sought pardons after the January 6 insurrection, a major disclosure that bolstered the claim that the event amounted to a coup and is likely to cause serious scrutiny for those implicated. The news was among three revelations portending potentially perilous legal and political moments to come for Trump and his allies.

Providers and peak bodies have welcomed a planned crackdown on fraud and other criminal activity inside the national disability insurance scheme, warning organised gangs and dodgy services have for too long undermined the system and disadvantaged vulnerable people. The new Labor government has also been urged to quickly engage with state governments on better integrating disability support into mainstream education, health and employment systems, with concerns over neglect of “tier 2” supports for people who can’t access the NDIS. 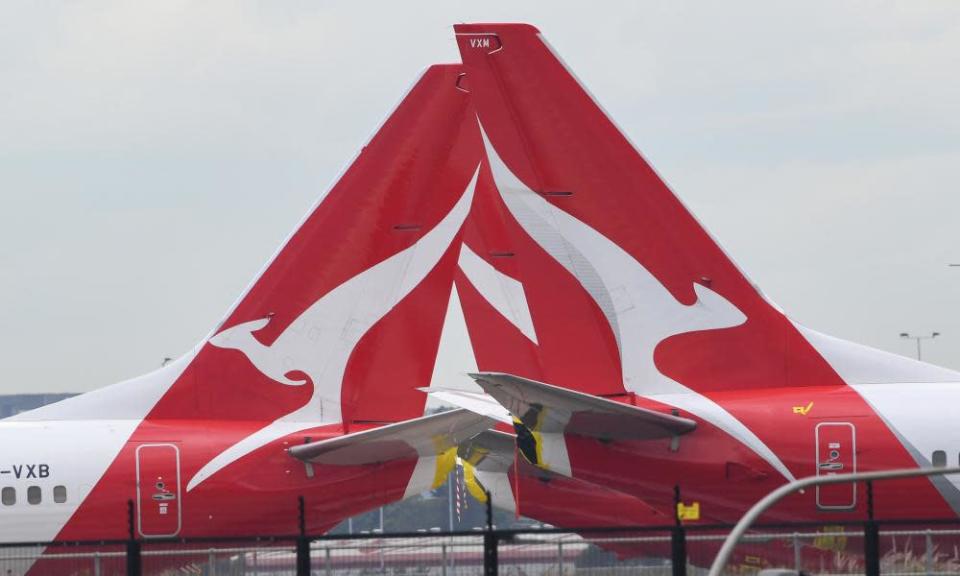 Many Australians are keen to leave the country after more than two years of travel bans and uncertainty, but air fares are steep. Photograph: James D Morgan/Getty Images

If you want to get from Australia to Europe in June or July on a route without long or multiple stopovers, a return economy flight will cost you at least $4,500, and in many cases, more than $6,000. What might once have covered an entire holiday is now the cost of the plane ticket alone. Flight Centre’s managing director Andrew Stark says increasing fuel costs, a lack of competition and limited airlines flying into Australia are the main culprits behind the steep fares.

A Covid honour roll has again dominated the Queen’s birthday honours list, with the former chief health officer Dr Brendan Murphy appointed a Companion of the Order of Australia (AC), one of 92 people who have been recognised for their work during the pandemic.

The Nadesalingam family has returned to the simple suburban Australian life they’ve longed for since they were taken from Biloela four years ago.

Eight people were rescued from blizzards and extreme winds on the summit of Tasmania’s kunanyi/Mount Wellington on Saturday, as winds, rain and below-average temperatures moved across Australia’s eastern states over the weekend.

The snail’s pace of upgrades to create accessible public transport in Victoria keeps people with disabilities isolated and in poverty, activists say. 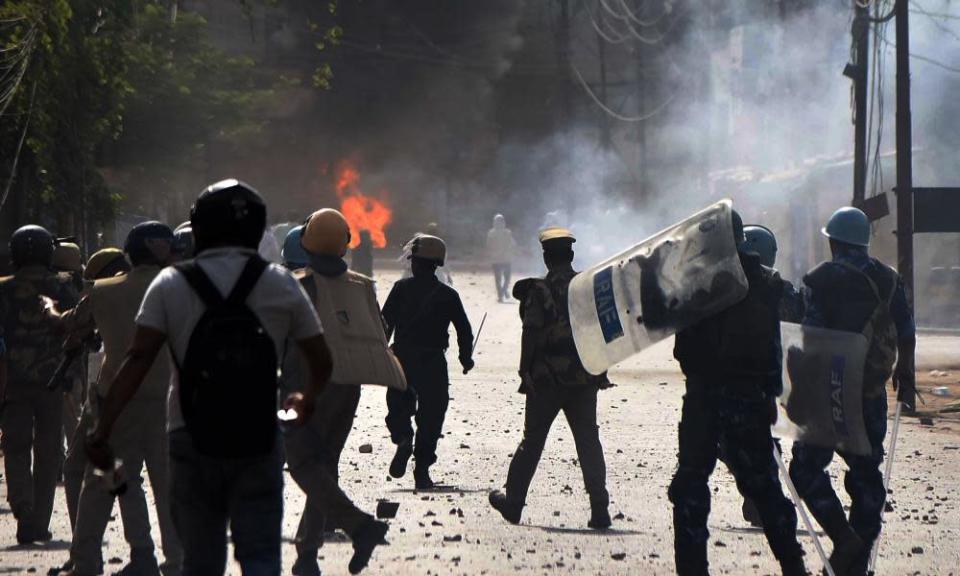 Authorities in the Indian state of Uttar Pradesh have demolished the homes of several people accused of involvement in riots last week, triggered by derogatory remarks made by ruling party figures about the prophet Muhammad.

The left-wing congresswoman Alexandria Ocasio-Cortez on Sunday refused to endorse Joe Biden for another run at the White House, adding to growing anxiety in Democratic circles over the president’s ability to win the 2024 election.

At the age of 101, a Dutch woman has been reunited with a painting that had been looted from her father by the Nazis during the second world war, but she has decided to sell it through Sotheby’s in London so that her family can benefit from the proceeds.

Former McDonald’s restaurants in the Russian capital have reopened under a new name, Vkusno tochka (“Tasty and that’s it”), in a rebranding intended to comfort Russians that they can continue to live western lifestyles – even if Big Macs are gone from the menu.

If you’ve ever kept a secret from a friend, a family member, or a romantic partner (and you have), then the chances are good that these same people have kept secrets from you. But revealing your secrets to others can deepen your connection to your confidante and may improve your life.

Through the black heavy curtains underground at Mona, it takes a second to regain your senses, writes Steph Harmon. Ashen debris, dust and ochre line a landscape of utter degradation, with blackened tree trunks and charred, hacked stumps, and the meaty, smoky smell of bushfire singeing your nostrils. At the back of the space sits a small burnt-out hut, filled with pointed new works from the acclaimed Australian artist Fiona Hall, who – with her collaborator AJ King – is behind one of three major installations that opened at the gallery this weekend for Dark Mofo festival. Hall and King have built an immersive lament to the destructive forces of colonialism and male ego – but hope grows amid the wreckage.

When Linda Kinstler’s Latvian grandfather disappeared in 1949, her grandmother already knew he had been a member of a notorious Nazi brigade. But then a pension cheque arrived from the Soviet security agency. Listen to this audio long read based on the story by Linda Kinstler.

A viral photo of an $11.99 iceberg lettuce has become a symbol for rising cost of living pressures in Australia. Reporter Cait Kelly explains to Laura Murphy-Oates why vegetable prices are soaring and what experts – and Guardian readers – say could save you money on groceries.

Full Story is Guardian Australia’s daily news podcast. Subscribe for free on Apple Podcasts, Spotify or any other podcasting app. 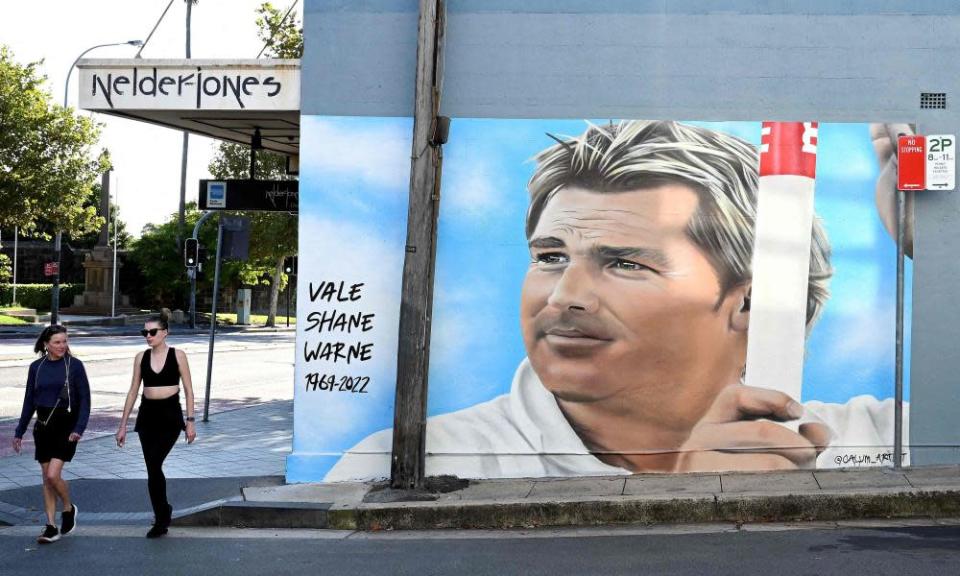 Shane Warne, whose sudden death in Thailand prompted an outpouring of national grief, was one of 992 Australians to receive awards on Sunday night. Photograph: Muhammad Farooq/AFP/Getty Images

Shane Warne has been recognised posthumously in this year’s Queen’s birthday honours list, with the cricket great becoming an officer of the Order of Australia. The former Test spinner, who died from a heart attack in March, was joined by the retired former world No 1 tennis player, Ash Barty, in being honoured with an AO, while the current women’s national cricket captain, Meg Lanning, was awarded an AM, a member of the Order of Australia.

Perth apartment owners are still living in developments using the cladding found on the Grenfell Tower while others have been forced to put their hand into their own pocket to fix the costly problem, according to WAtoday. Adelaide school students are helping bring endangered fish species back from brink of extinction, the ABC reports.

Australia’s first Indigenous supreme court judge, Lincoln Crowley, will be sworn in at a public ceremony in Brisbane.

If you would like to receive the Guardian Australia morning mail to your email inbox every weekday, sign up here.

If you have any questions or comments about any of our newsletters please email newsletters@theguardian.com.

Every Saturday at 6am, enjoy early access to the best journalism planned for the weekend in one elegant app, plus a curated selection of the week’s news and analysis from Australia and the world.