My professional background is in church work, but I left that vocation in 2012. In 2015, I earned an MBA from the Aix-Marseille University, located in in Aix-en-Provence in southern France. I currently live in the midwest with my spouse, children, and a cat who seems to like me more than she likes anyone else in our house. 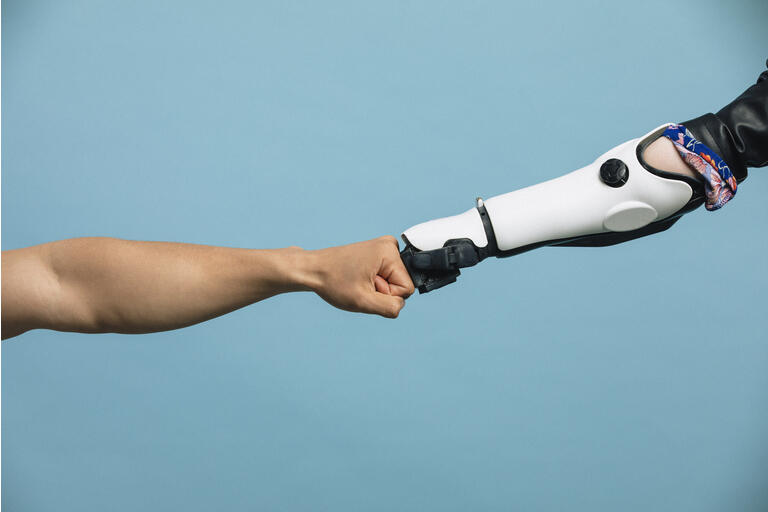 Within my extended family and my in-law's family, I've had the unfortunate experience of seeing some of the physical impairments that can result from strokes. Purely based on my limited anecdotal observations, I can say most of the people I've known who have suffered strokes or TIAs [transient ischaemic attacks, or mini-strokes] were impacted in the clarity of their speech - either experiencing more slurred speech or difficulty getting words out in the order that the brain wanted them to be said.

Furthermore, one person permanently lost the ability to walk independently, and another was left with a tremor in the dominant hand. I do not closely follow developments of treatments for stroke, so I don't know the first thing about any potential cutting edge therapies for the struggles with speech, however I have followed the medtech development of robotic applications that can help some stroke victims be able to walk more independently and use their hands and arms more steadily.

I have written at length over multiple years here at Seeking Alpha covering two of the small medtech firms that have developed robotic aids for mobility, ReWalk Robotics (RWLK) and Ekso Bionics (EKSO), but I've not turned my eyes previously to a rather similar company with technology for the upper body limbs, Myomo (MYO). Due to the general similarities in development, size, markets, and business challenges and models, I am initiating coverage, and do not yet find that there is a compelling investment thesis.

An Introduction to Myomo

Myomo's history traces back to efforts by the US Veteran's Affairs department to support the development of more advanced upper limb orthoses [braces] for wounded soldiers. Researchers at the Massachusetts Institute of Technology developed what became the MyoPro solution, a robotically enhanced arm brace that allows users to regain a high degree of functionality in their arms, wrists, and hands [for clarity, the image at the top of the article is NOT the Myomo product, just a generic image of a robotic arm; the image below is the device].

It started commercializing the technology in 2006, and the company went public in 2017. A single MyoPro device can cost upwards of $80,000, although reports indicate that insurance coverage might pay an orthotics and prosthetics clinic anywhere from $20,000 to $50,000. 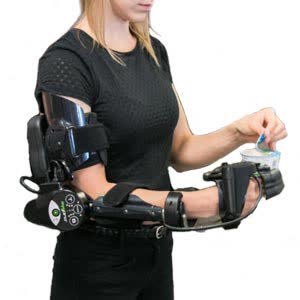 The dependence on insurance coverage is a major overlap with ReWalk's business model in particular, one that has been slow to develop in ReWalk's case. The picture for Myomo comes across somewhat better, however I think underneath is not as far ahead of ReWalk as one might think.

On its website the company states that "MyoPro may be covered by most insurance companies, Medicare Advantage plans, and the U.S. Veterans Administration." At first glance, this may make it appear that there is broad coverage for the device, when in fact the reality is that providers need to secure a pre-approval from insurance, and claims are generally treated on a case-by-case basis, which is more or less where ReWalk is also in the US market.

Myomo may have a clearer view into which patients should qualify and have the insurance payments come through, but this is far from routine medical billing. So far, the company has had more than 20 insurers in the United States provide coverage at least once. Of particular interest, Myomo is also pursuing and obtaining insurance coverage in Germany, which is the most well-established market for ReWalk as well. I do not find this surprising, but a sensible path given the overlap in affected patient populations. Ekso Bionics, in contrast, has a completely different business model primarily focused on serving rehab and therapy centers and not billing insurance companies to cover their lower-limb exoskeleton units for individual use.

For Myomo, the balance of sales currently remains heavily tilted towards North American sales, but Germany is not the only foreign market coming into play. A joint-venture in China is being finalized with Ryzur Medical Investment Company (note: the link is to the Chinese site; the only English site is limited to the partner's medical protective gear such as masks, presumably due to Covid-19).

Once finalized, it should bring some additional cash for Myomo, with a minimum $8 million investment from the partner and up to $20 million over a 5-year span, in addition to minimum unit purchases and up-front license fee of $2.5 million. Myomo will hold approximately 20% ownership of the venture. Things are progressing along, as they have secured the patents in China and you can find a job posting on their website for a JV project manager. It is readily apparent why China is such a big target for a company like Myomo - the size of market opportunity. CEO Paul Gudonis put this way on the most recent earnings call:

Myomo seems to be further down this path than Ekso Bionics or ReWalk ever went, although both attempted the same concept only to see them fail to materialize in the end. Ekso Bionics succumbed to a CIFUS concern in 2020 on a $100 million deal, while ReWalk's partner appears to have breached the agreement made in 2018, and its board member was removed by April 2020. I believe ReWalk did receive the first $5 million tranche of investment from its partner out of a total that would have been $20 million had the full deal worked out, so I suppose ReWalk went further than Myomo has yet. However, Myomo's agreement is on a smaller although similar scale, and appears to be on reasonable footing at this point. I do not bring up the negative examples to imply that Myomo's agreement will not work out better, just to indicate that the track record of such ventures thus far within the industry has not been promising.

A Nascent Industry Struggling With Cash

As of the end of the third quarter, Myomo had $12.6 million in cash, and another $2 million in receivables, although a significant insurance payer who had previously been willing to cover the device has been flagged due to an increasing number of denied claims. In addition, the company also negotiated an agreement with some holders of warrants after the close of the quarter, which does bump the total cash up closer to $17.5 million; the joint-venture could boost the balance as well by the end of the year.

However, even relative to some of its smaller peers (as measured by revenues), that cash balance is quite slim, and the need for additional cash infusion is on the horizon. There is no debt on the books, so the cash balance equals the net cash available, but ReWalk and Ekso Bionics both find themselves in much stronger cash positions, having already taken steps to shore up their balance sheets. 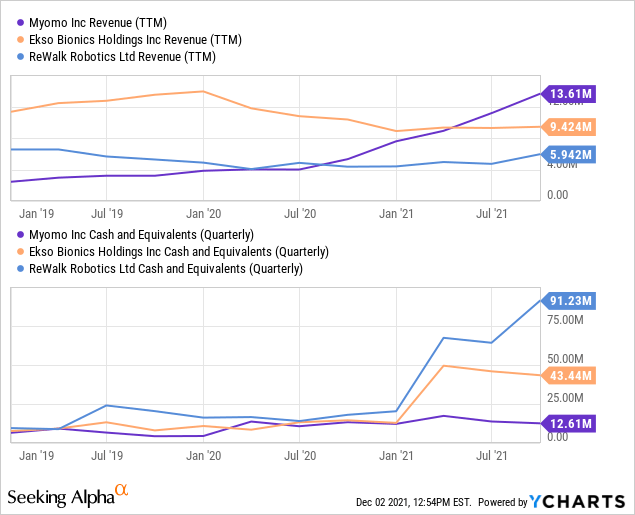 Myomo has just more than double ReWalk's sales over the last twelve months, but has less than 15% of the cash. While not as extreme, Ekso Bionics is slightly smaller by sales, but has more than 3 times as much cash, or 2 times if counting Myomo's warrant conversion and initial cash from the joint venture. The cash burn rates at all three of these is not identical exactly, but not terribly different.

Through the first three quarters of 2021, Myomo has used $7.72 million in cash for operations, or ~$2.6 million per quarter, compared to $3.0 million per quarter for ReWalk and $2.7 million per quarter for Ekso Bionics. Unless there is some amazingly sharp turnaround in the cash used, Myomo will need to raise new funding within the next 12 months. I cannot predict if they would attempt to raise debt instead of equity, or convertible debt, but no matter what route the company goes, it will not be good for its current shareholders, at least in the short term.

To the positive, however, sales do appear to be steadily gaining traction. Myomo recorded $4.4 million revenue for Q3, and has more than $5 million of potential revenue in its order backlog (defined as units that have received authorization from an insurance payer but have either not yet been delivered to the patient or the payment has not been received). This reflects more than 170 units on the backlog list as of September 30, and not counting any of the 330 cases in the pipeline that could potentially be converted to claims. On the topline metric, Myomo seems to be finding a working formula that has pushed it well ahead of a peer like ReWalk.

I make no secret that I admire the technology at work here, and have no doubt that patients have benefited in ways that are difficult to attach a financial value to. However, across the industry, the results for investors have not been good for anyone taking a long-term buy and hold approach, but the industry as a whole is still so young and small that profitability is still some ways out. From a historical perspective, Myomo's equity has held its value better than the others over the last four years, with a lot of volatility. In fact, an investment in 2017 in Myomo in late 2017 would have largely mirrored ReWalk's price action until about two years ago, when it spiked in early 2020 and has more or less managed to break even over the last 48 months. 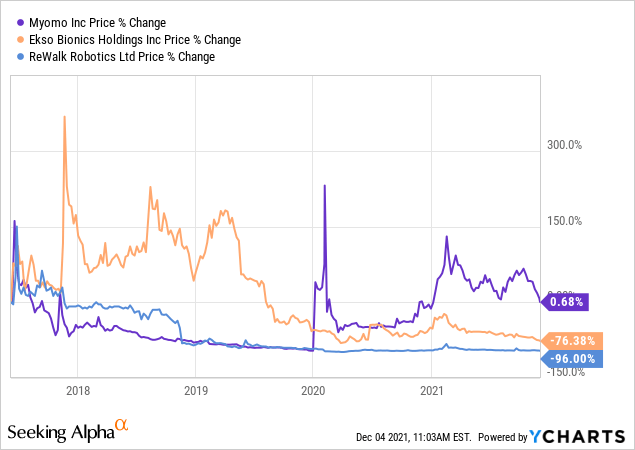 However, in spite of the historical advantage over Ekso Bionics and ReWalk, from a current decision standpoint as a potential investment, the bull case premised on growing sales and insurance reimbursements in the United States and Germany, combined with an upcoming entry into China simply does not outweigh the fact that the company is cash-poor and burning cash fast enough to need additional funding before the end of 2022. All of these companies are engaged in interesting advancements and breakthroughs, but all carry very high risk as investments, and I believe Myomo shareholders will see dilution in the coming quarters.

This article was written by

My professional background is in church work, but I left that vocation in 2012. In 2015, I earned an MBA from the Aix-Marseille University, located in in Aix-en-Provence in southern France. I currently live in the midwest with my spouse, children, and a cat who seems to like me more than she likes anyone else in our house.

Disclosure: I/we have a beneficial long position in the shares of RWLK either through stock ownership, options, or other derivatives. I wrote this article myself, and it expresses my own opinions. I am not receiving compensation for it (other than from Seeking Alpha). I have no business relationship with any company whose stock is mentioned in this article.