Obsessed: “The Staircase” and The Shoddy Science Of Blood Pattern Analysis

Welcome to OBSESSED, in which I provide you a reading list / media consumption list that speaks to my primary hobby: doing obsessive amounts of research into a singular topic or story for no reason. This week I binged the first five episodes of HBO’s The Staircase, which got me heavy back into the Michael Peterson case, which then led to a tangential deep-dive back into Blood Pattern Analysis! 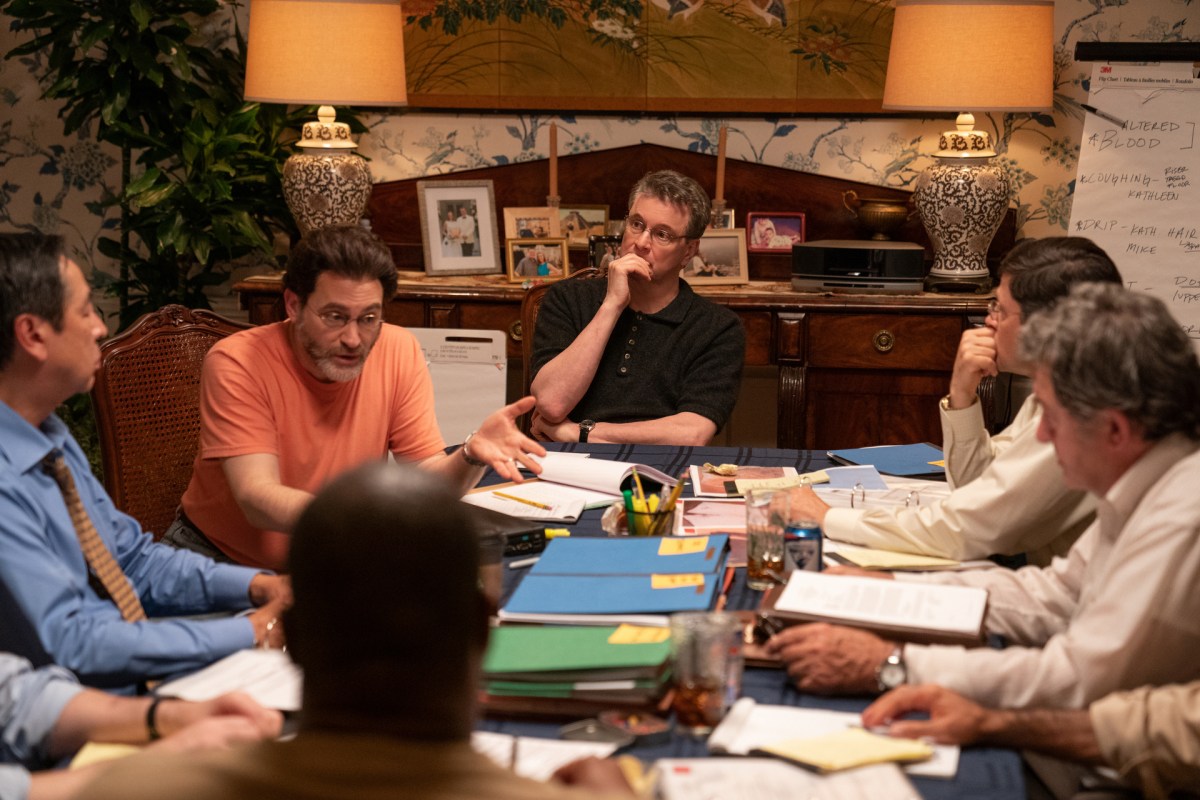 Photograph by Courtesy of HBO Max

Like so many “based on a true story” stories released in 2022, HBO Max’s limited series The Staircase, which aimed to dramatize the 2001 death of Kathleen Peterson and the trial of her husband Michael Peterson, who was accused of murdering her — faced formidable odds insofar as it needed to assert its need to exist at all.

The story had already been told, after all, and told famously: originally released in 2005 and produced by French documentarian Jean-Xavier de Lestrade, The Peabody-award-winning Staircase docu-series is considered a foundational work of the true crime genre and one of the best true crime docs of all time, setting the stage for future epics like The Jinx and Making a Murderer. The filmmakers had then-unprecedented access to Micheal Peterson and his legal team and family leading up to the trial and afterwards, capturing over 600 hours of footage. Although Peterson claimed he found Kathleen near-death at the bottom of the stairs and then called 911, many others were certain he’d murdered her himself.

I was surprised then, as so many apparently were, to really truly love Antonio Campos’s HBO mini-series, The Staircase, starring Colin Firth as Michael Peterson and Toni Collette as Kathleen Peterson. As noted by Vulture , the HBO series has managed to add new dimensions to the story — providing Kathleen with a human narrative beyond her original positioning as simply the body, “[widening] its canvas enough to register as both a crime drama and a family drama” and making the documentarians characters in the story. And, relevant to our interests here; the issue of Michael’s sexuality is handled with more depth and understanding, and his daughter Margaret’s apparent queerness.

The Staircase is also well-made and well-acted and was, apparently, in production for many years rather than produced as a reaction to the current boom in such programs. But of course part of what gives this story its endurance is that even two decades later, there’s still not enough evidence to prove his guilt or his innocence beyond a reasonable doubt and debate RAGES ON. 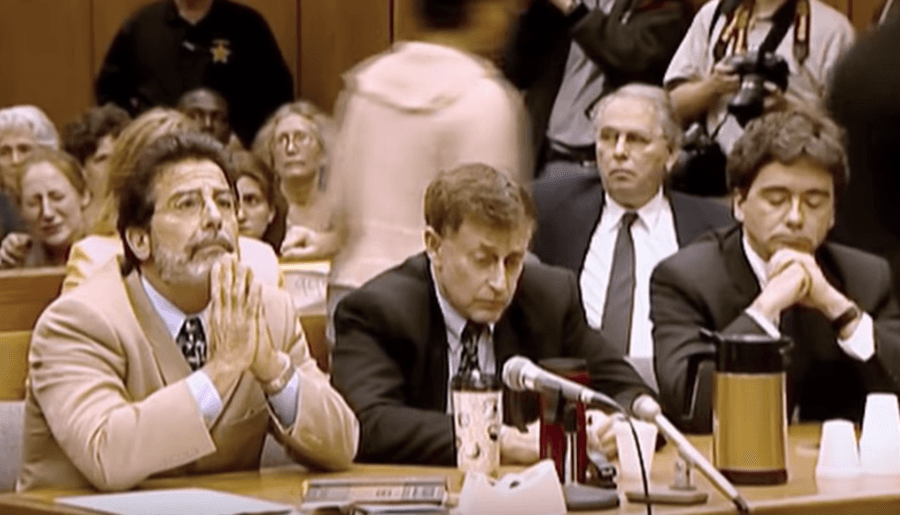 The original documentary The Staircase (Soupçons in French) appeared in an abbreviated version on ABC’s Primetime Thursday in July 2004. It debuted in full in France that October and on the BBC in January 2005 before landing on the Sundance Channel in the US on April 2005. The final chapter of the series, “The Verdict,” showed the jury convicting Michael Peterson of the murder of his wife.

Lestrade returned to the story in 2012-2013, shooting footage that’d become a two-hour sequel to the original, covering new developments in the case.

This was followed by another three episodes produced for Netflix, dealing with yet another series of developments in the case happening in 2017-2018, and then the entire series was made available on Netflix.

Recently, Filmmaker Jean-Xavier de Lestrade told Vanity Fair that he felt betrayed by the production and “couldn’t believe it was so inaccurate.” He opened up his entire archive of footage to Antonio Campos, who also spent time with their crew shooting the documentary in 2011. They feel that HBO’s Staircase implies that editor Sophie Brunet (who also worked on Blue is the Warmest Color ) edited the eight original episodes of The Staircase while in a relationship with Peterson, a relationship which didn’t commence until she’d left the project. She returned as an editor for the five bonus episodes, and they’d broken up by the time she completed the final three.

Brunet spoke to Vanity Fair directly this week, saying she was upset to learn she was a character in the series at all, but has since become friends with Juliette Binoche, so that’s a bonus. She affirmed that she finished all of her work on the first eight episodes before corresponding with Peterson directly. A highlight of this piece is when she talks about Peterson’s account of their first meeting, noting “You have to notice that being accurate is not Michael’s cup of tea.”

Podcasts About The Michael Peterson Case

The Staircase HBO Podcast: I’d always been skeptical of the network-produced show-accompanying podcasts but after listening to the HBO podcast for Chernobyl (which’ll be in a future installment of Obsessed, obviously) I changed my mind. Hosted by Nancy Miller, this podcast features interviews and insights with showrunners, actors (Toni Colette’s in the first episode), directors, researchers and other relevant experts.

What Is Blood Stain Pattern Analysis and Why Has This Technique Been So Contentious?

The Peterson case is also one of many that are talked about when we talk about BPA (Blood Pattern Analysis), a forensic technique employed by investigators who believe they can garner all kinds of crucial information about what took place at a crime scene from the bloodstain patterns left behind. Exaggerated understandings of exactly how much can be definitively determined from analyzing bloodstains have been reinforced by shows like Dexter and CSI and people like renowned Forensic Scientist Henry Lee, who was hired by Michael Peterson’s defense team.

Peterson was able to obtain a re-trial after the prosecution’s chief witness, Duane Deaver, was found to have exaggerated his expertise and his experience creating experiments to draw bloodstain-informed decisions. He claimed, on the stand, to have visited hundreds of crime scenes throughout his career but in fact had only visited 17.

Deaver’s misconduct, and that of others in North Carolina’s state crime lab, expanded far beyond the scope of the Peterson case. An independent review of the North Carolina state crime lab in 2010 determined misstated or falsely reported blood evidence happened in over 200 cases occurring before 2003. This review was prompted by the North Carolina Innocence Commission’s decision to exonerate Gregory Taylor for the 1993 murder of Jacquetta Thomas, following revelations including that the SBI had withheld favorable blood test results from the defense, only presenting the unfavorable results at trial. Deaver claimed  he was complying with lab practices by failing to report the key test. Yikes if true!

There’s a lot of Bloodstain Pattern Analysis content in The Staircase docuseries and its dramatization which was great because this of course prompted a tangential obsessive dive about this particular forensic science and its dubiousness!

In 2009, the National Academy of Science released a report on Forensic Science in the United States that determined the “scientific” conclusions being made by BPA experts were actually highly subjective, that many of those testifying with certainty about BPA evidence lacked the education to do so and that “the uncertainties associated with bloodstain pattern analysis are enormous.” In 2021, a rigorous study confirmed that BPA analysis has “concerning error rates” and “disagreement among analysts,” determining a margin of error that should prohibit such analysis from being introduced as evidence until standards are determined to eliminate its subjectivity.

A great introduction to the whole blood splatter analysis issue is 2018’s “How a Dubious Forensic Science Spread Like a Virus,” which begins with the story of Herbert McDonnell, the man who pioneered the “science” and then “created an industry in which he became the reigning expert.”  That piece is by criminal justice advocate Leora Smith, who’s also interviewed in the third episode of HBO’s The Staircase podcast and gives a very digestable summary of the issue.

Smith worked with legendary journalist Pamela Coloff on a massive reporting project around BPA and its impact on one case specifically: the murder of Mickey Bryan, for which her husband, adored school principal Joe Bryan, was convicted based primarily on BPA evidence. In Blood Will Tell: Part One, Coloff details how despite Joe literally being in a different town at the time of the murder and having no motive (although the prosecutors did attempt to suggest he was hiding a secret gay life) (he wasn’t), “blood splatter evidence” on a flashlight analyzed by alleged expert Robert Thorman sealed his fate. There’a also a 20/20 episode on the case, which’s just a really incredible miscarriage of justice — Joe Bryan spent 35 years in prison for a crime he REALLY CLEARLY DID NOT COMMIT.

In Part Two of Blood Will Tell, Coloff actually takes the same Blood Splatter Evidence class that Thorman did, and realizes an “unsettling fact”: “two bloodstains can look entirely indistinguishable from each other, even if the actions that created them were wildly different.” She then gets into the history of the practice, and how it moved out of the scientific and mathematical realm of actual forensic scientists into a flattened set of accessible and inaccurate generalizations and the self-reinforcing system that began forming in which experts’ testimony was considered valuable by judges based on the fact that they had testified as experts before. This piece also brings up the case of Norma and Ed Clark, which was covered in the Netflix series “Exhibit A.”

The Times also has a timeline of the usage of Bloodstain Pattern Analysis in “How an Unproven Forensic Science Became a Courtroom Staple.” 1995 is when Duane Dever enters the picture in North Carolina in the case of State v Goode. By 2009, when Deaver is found to have provided misleading information for years by a federal court, his findings had already been used to set precedent of blood stain analysis as a reliable field in Tennessee and Texas.

How Many Murder Cases Did Celeb Forensic Scientist Henry Lee Botch? – Lee, who testified for Peterson, is one of the world’s most renowned forensic scientists, having testified in cases including JonBenet Ramsey, OJ Simpson, Phil Spector and Casey Anthony. But he allegedly has also fucked up a lot!

Bloodstain Analysis Convinced a Jury She Stabbed Her 10-Year-Old Son. Now, Even Freedom Can’t Give Her Back Her Life – Julia Rea was convicted of killing her son in large part due to the testimony of a crime scene investigator who made his claims about the blood on Rea’s shirt without offering any proof, data, or description of the experiment that led to this conclusion. Her lawyer told the jury that his claims were not scientific or verified, but they convicted her anyhow.

Convicted by Blood: The case of Brad Jennings – How a woman’s suicide led to her husband being convicted of homicide.

Suspended Justice: An Indiana State Trooper is convicted of murdering his family based on the testimony of a crime scene photographer with no qualifications to analyze bloodstain patterns.

Are you watching The Staircase on HBO what do you think???