Another ram-raid overnight has caused damage to an Auckland liquor store.

In a statement, police said just before 1.00am a vehicle was used by multiple offenders to burgle the store on Dominion Road in Mt Eden.

The offenders fled the scene in the same vehicle used to access it, after stealing items from the store.

On Friday morning, part of the store has been boarded up and police are reviewing CCTV to try and identify the burglars.

The store manager told 1News the offenders had broken into one side of the store and stolen the closest items which were miniature bottles of alcohol.

He said neighbours heard the vehicle crashing into the glass and contacted the owner.

He said the store was also ram-raided in January but nothing was taken that time.

"We are now looking at approaching the Council because after all the ram-raids happening they say they are going to set up a team to help businesses," the store manager said.

"Unfortunately all police can do is react but we want to prevent it. For us it's happening at night so no one is getting hurt but if you make it too hard for them [offenders] to come in at night they may try and offend during the day.

"We can only hope this goes out of fashion," he said.

In a second overnight ram-raid, police were called to a commercial property in the Christchurch suburb of Longhurst at 3.40am after a car drove into a building. 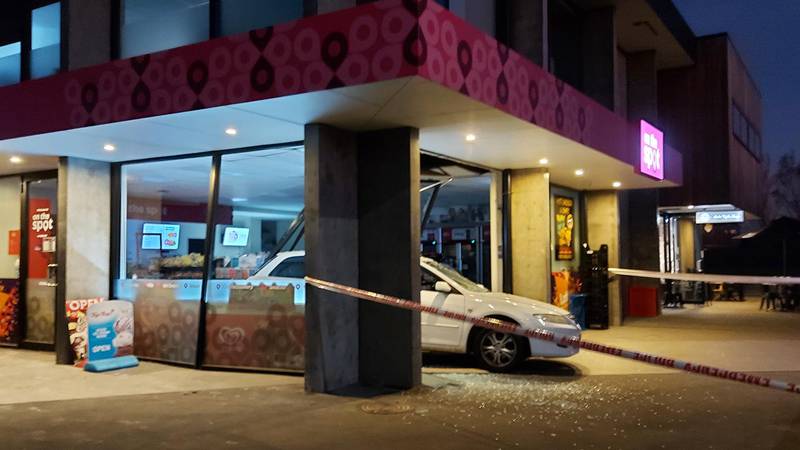 A car rammed into a commercial property in Longhurst overnight. (Source: Supplied)

Police said nothing was stolen and the offenders are being sought.

It comes as deputy Prime Minister Grant Robertson said on Monday that discussions are ongoing over how to support small business after a recent spate of ram-raid robberies.

He said he expected more detail to be announced in the next week and said there were a number of sources of potential funding.