Shiba Inu (SHIB) has been recovering from the massive sell-off in crypto over the last few days. The coin looks like it has some significant upside and could outperform other major coins on its road to recovery. More price analysis to come later but first, key developments: 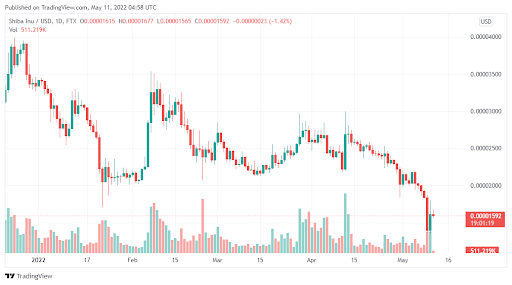 The beginning of May has not been good for crypto. The market has generally dropped, and SHIB was not spared. The coin lost around 40% of its value in the last 7 days. However, there is a good opportunity for a quick rebound and a trend reversal that could push the price higher.

Can SHIB reclaim its all-time highs this year?

The volatility we have seen in the broader crypto market has been very persistent. Every time the market recovers, we end up seeing another sell-off shortly after. It is therefore unlikely that SHIB will regain its all-time highs this year.

But this does not change the positive outlook for the meme coin. There is still an opportunity for relatively better gains before 2022 is out.