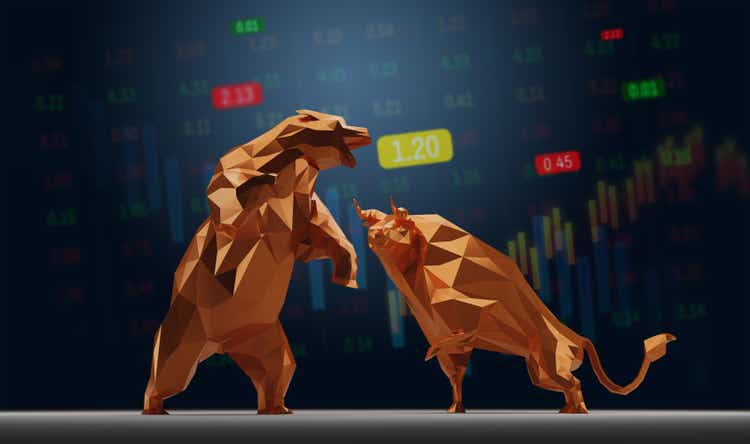 After reaching fresh all-time highs in early January, the SP 500 (NYSEARCA:SPY ) has plummeted to the point where it is now flirting with bear market territory. In fact, earlier this month it officially breached the 20% off of highs metric that is used to officially label a bear market: 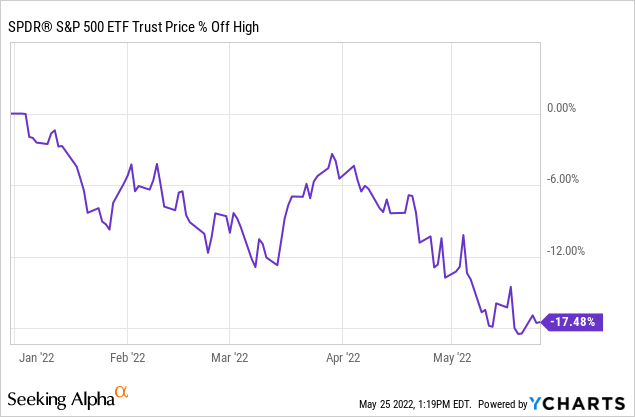 This decline has been led by sharp pullbacks in many big tech giants such as Tesla (TSLA), Amazon (AMZN), Netflix (NFLX), Meta (FB), and even Apple (AAPL):

While a case can certainly be made that the market has corrected enough as each of these tech titans have strong cash flow generation and are still posting solid performance metrics with stellar competitive advantages and balance sheets, we think things could also potentially get much worse before they get better. In this article we will discuss four reasons why this could be the case.

One of the biggest ways that the Federal Reserve has fought past bear markets was by lowering the federal funds interest rates. This method has proven to be very effective because - as Warren Buffett likes to say -

The federal funds rate is particularly impactful on the stock market because it is the interest rate that depository institutions charge each other for overnight loans and is also the main basis for determining the prime interest rate, which in turn influences mortgage loan rates, credit card rates, and many other business and consumer loan rates. As a result, whenever the Federal Reserve raises the federal funds rate, it is increasing the cost of money, thereby shrinking its supply. Lowering the federal funds rate has the opposite effect, increasing the monetary supply by reducing its cost.

With this in mind, it is informative to note that in both the runup to the 2008 crash and the 2020 crash, interest rates were meaningfully higher than they are today:

In addition to the interest rate related headwind, inflation also poses a major threat to the current economic situation that could also lead to this downturn being much worse and more prolonged than the last two.

Similar to interest rates, high inflation provides a double negative shock on the stock market as it often means that earnings for businesses are eroded via reduced consumer demand and lower profit margins while also pushing investors to seek high nominal total return potential from investments in order to generate real returns (i.e., net of inflation).

As an aside, it also has a very negative impact on the Federal Reserve's ability to combat an economic and/or stock market downturn via cutting interest rates and printing money as those measures exacerbate inflation further. In fact, the Federal Reserve is working towards reducing the size of its balance sheet rather than expanding it further, meaning that expanding quantitative easing to reflate the economy is unlikely in the current environment. This means that the Federal Reserve's hands are largely tied here, preventing it from doing much to combat the current downturn in contrast to the past two downturns when the government engaged in massive quantitative easing:

It is no secret that geopolitical headwinds are greater today than they were in 2008. In addition to the war in Ukraine, the threat of war in East Asia, the Middle East, and potentially expanding into a global war or even nuclear war is perhaps higher than it has ever been since the end of the Cold War. Palantir's (PLTR) CEO Alex Karp said the other day on CNBC that the chance of nuclear war is 20-30%, while Ray Dalio has repeatedly emphasized that we are transitioning into a new world order where conflict between the established great power (the United States) and the rising great power (communist China) is growing increasingly likely.

Meanwhile, we are still dealing with stubbornly persistent COVID-19 flare-ups in strategic locations such as Shanghai, China and the world appears headed for a food shortage due to fallout from the Ukraine war and lingering severe supply chain issues.

While 2020's crash was pretty much entirely fueled by fears and uncertainty over the COVID-19 outbreak (which wound up being largely unfounded other than for the negative impacts from government lock down measures), the long-term headwinds from current geopolitical headwinds are potentially much more severe. In particular is the fact that soaring geopolitical tensions means undoubtedly reduced global trade and much higher government spending (i.e., taxes and inflation), placing serious long-term burdens on the major economies of the world.

Last, but not least, the valuations we are seeing today are much higher than they were in the lead-ups to the 2008 and 2020 crashes.

Furthermore, the Buffett Indicator - a metric that compares the U.S. Market Value to its GDP - well exceeded 200% on its recent pack, whereas it was in the neighborhood of 175% in early 2020 and just slightly in excess of 150% at its the pre-2008 crash peak.

The SPY has been on a tremendous run, combining low fees (currently expense ratio is just 0.09%) with high liquidity to amass at its peak over $450 billion in assets under management.

Index investing has become wildly popular with retail investors and SPY has given them little reason to look elsewhere, by roughly tripling investor money over the past decade while offering the most passive and liquid highly diversified investment vehicle on the planet.

However, with interest rates remaining near historic lows and very likely headed higher in the near term, inflation rates at four decade highs, geopolitical headwinds at multi-decade highs, and market valuations near historical peaks, index investors in SPY could be in for a rude awakening.

As a result, we are diligently working to build a portfolio of high quality dividend stocks - many of which have low correlation to SPY - in order to set ourselves up for potential outperformance in what could be some very rocky years for the SP 500.

If you want access to our Portfolio that has crushed the market since inception and all our current Top Picks, join us for a  2-week free trial  at High Yield Investor.

We are the fastest growing high yield-seeking investment service on Seeking Alpha with ~1,200 members on board and a perfect 5/5 rating from 145 reviews.

Our members are profiting from our high-yielding strategies, and you can join them today at our lowest rate ever offered.

You won't be charged a penny during the free trial, so you have nothing to lose and everything to gain.