The Depp-Heard Verdict Shattered the Greatest Myth About TikTok, Once and for All

Jun 5, 2022
Amber Heard Johnny Depp: The trial played out on TikTok, and it was a disaster. Skip to the content
Downtime 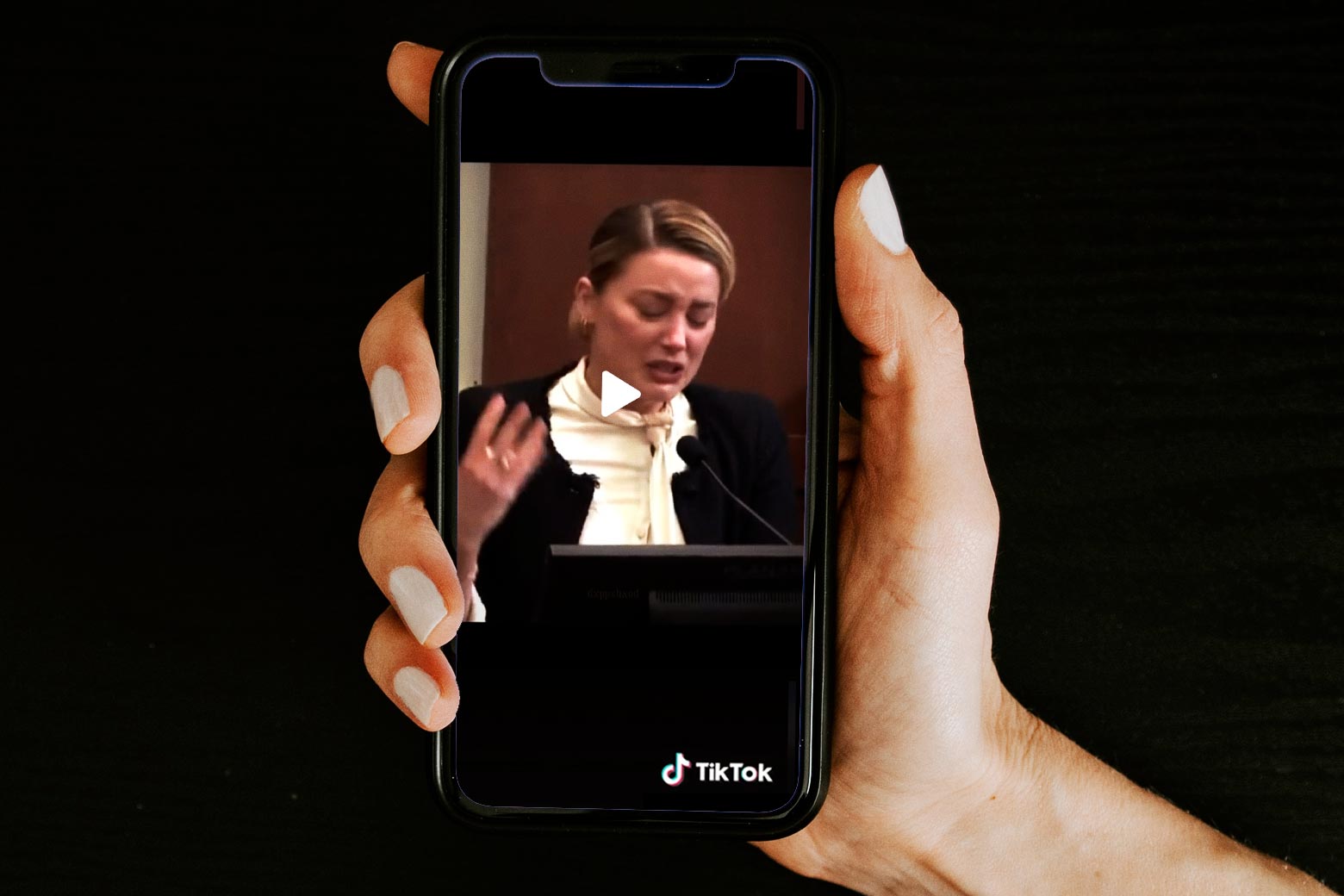 Photo illustration by Slate. Photos by Kelly Sikkema on Unsplash and TikTok.

The night of the verdict in the Johnny Depp–Amber Heard trial, I went out for a drink with a friend. Over a cocktail, we sighed heavily. It was a birthday celebration, so we tried to talk about cheerier things, but the conversation kept drifting back to the trial. She defamed him? His lawyers also defamed her? But a British court already ruled a newspaper could print that Depp abused her? What does this mean for Evan Rachel Wood ? What does this mean for average people, our friends, ourselves, who experience abuse?

Out of the corner of my eye, I spotted the bartender pantomiming a bump of coke and laughing with their colleagues. “She didn’t even TRY to hide it,” they said. My brain immediately knew whom they were talking about: Amber Heard. And I knew this because my TikTok For You page has been overrun for the last month with trial coverage—specifically, anti-Heard trial coverage. Body language experts. So-called lawyers giving their “professional” opinions. Lance Bass of NSYNC lip-syncing to her testimony. True crime nuts and gaming streamers who pivoted to covering the trial, probably after realizing, like so many other creators, that it could be an audience growth hack and a potential financial boon.

The most incredibly stupid theory these videos proffered was that while on the stand, Heard snorted cocaine concealed in a tissue she was using to blow her nose. I will not link you to a video, but if you must search for one, you will find an abundance of them. I can’t say for certain where that bartender found this particular conspiracy theory, but if I were a betting woman, I’d say it wasn’t from watching the trial live feed in real time. More likely, it came from social media—YouTube, Facebook, or probably TikTok.

During this trial, listening to the ways people I follow online and even know in real life talked about Amber Heard and Johnny Depp felt kind of like reading Facebook posts from my Newsmax-pilled aunt. The way certain rhetoric gets repeated but never scrutinized. Accepted as fact because it was delivered in a confident tone from a source who promised not to lie to you like a traditional media outlet. Meanwhile, Vice, a traditional media outlet, found that the Daily Wire, an ultraconservative site founded by Ben Shapiro, pumped thousands of dollars into promoting anti–Amber Heard propaganda online, specifically on Instagram and Facebook.

You wouldn’t know any of these forces were at play if you opened TikTok. Instead, you’d have found an absolute deluge of pro-Depp videos and, until the eleventh hour of the six-week trial, effectively no pro-Heard content. Videos with the hashtag #IStandWithJohnnyDepp have been viewed over 500 million times. The same hashtag with Heard’s name has just 25 million. At some point, public opinion became a numbers game. Heard had no fair shot at winning.

The jury for this trial was not sequestered. Which means they, like me and you, were free to open up apps like TikTok and get an internet vibe check day after day after day. They could watch videos of Heard “snorting coke.” Or people making wild claims about all the reasons she was lying, from the words she chose to the makeup kit she allegedly used to cover bruising.

It would be disingenuous for me to write this and act like I too didn’t, to a small degree, get got by the pernicious way TikTok’s algorithm seized on this moment. For my own well-being, I tried to avoid trial content on the app. I chose to focus solely on how this particular case might affect survivors seeking justice in the future, and found myself mentally echoing lines like “two people can be bad,” mostly in an attempt to punt on having an unwinnable debate on the internet. Still, the TikToks found me. If they found you too, I empathize. Reminding yourself as you see a video followed by another video followed by a dozen more to critically ​​consider everything you’re being shown? That takes a lot more effort and energy than most of us put into scrolling through our feeds as we lay in bed at night.

Objectively, it’s true: Two people can be bad. Two people can be “bad” in deeply unequal measure. And in a just world, one where silent forces from ad dollars to algorithms aren’t manipulating the way we get our information and survivors are allowed to be imperfect, you might be able to say something like that and not have it get lost in translation as a pseudo-feminist cop-out for just saying “I don’t believe Amber Heard.” Heard’s suffering was a successful implementation of the way the internet was designed. Social media is not built for nuance.

Most of us watching this play out online don’t know Johnny Depp or Amber Heard. We only know what we know. If we were to actually have that debate, the factual points of argument would be limited to decisions in court. A British court ruled Heard was within her rights to call her ex-husband a “wife beater.” (That very same court has denied Depp’s appeal.) And an American jury ruled that two sentences in a #MeToo opinion piece that did not even name Depp were defamatory and worth millions in compensation. But this isn’t a fair debate. TikTok’s algorithmic thumb on the scale helped make sure of that.

During the same weeks as the trial, a foundation from a new company called Jones Road was also going viral. It was inescapable, thanks in part to undisclosed paid ads on TikTok. When I asked the company’s founder, Bobbi Brown, if TikTok had always been part of the marketing plan, she said no, describing her initial impressions of the app as a place for teenagers doing dances. Which, to be fair, TikTok does have a lot of that. What else would Jimmy Fallon have to talk about on The Tonight Show ? But this sentiment—which is still widely held—has finally, definitively been shown to be a harmful fantasy. In a moment where an app like TikTok appears to have held so much sway over a very public trial with potentially far-reaching implications, we ignore its true power at our peril.

This isn’t news to anybody who works in social media or even just considers themselves particularly internet-savvy. The kinds of people who have been shouting “take TikTok seriously” for years when it comes to everything from marketing to political campaigns. But the thing this trial has shown is that this group isn’t the majority. Not even close. Seek out TikToks about the trial, and you’ll suddenly be drowning in videos telling lies about how Amber Heard could go to jail and fully misrepresenting the basis of the case. (Once more, this trial was about defamation.) I looked for those videos because I wanted to be in the true muck of it. But those videos, as the numbers demonstrate, found millions of other eyeballs organically. Eyeballs connected to brains, many of which believed what they were being shown.

TikTok can show you dancing teens, sure. But it can also manipulate courtrooms and public opinion with brutal efficiency. If that freaks you out … good. It should.