'They run away like chickens': Ferocious fighting for 'unreachable' Ukrainian city that's like 'hell' for Russian soldiers

On one of several roads that lead to a place called Izyum, there is a sign with a spray-painted addition reading: "Russian soldier, you've been sent to hell."

It is a warning - and a threat - issued by Ukrainian troops after three weeks of ferocious fighting for this city of 50,000.

It also serves as a reminder, amid the diplomatic chatter emanating from Istanbul, that the Ukrainian military remains steadfast and realistic after a number of positive-sounding pronouncements from the Kremlin's lead negotiator, Vladimir Medinsky. 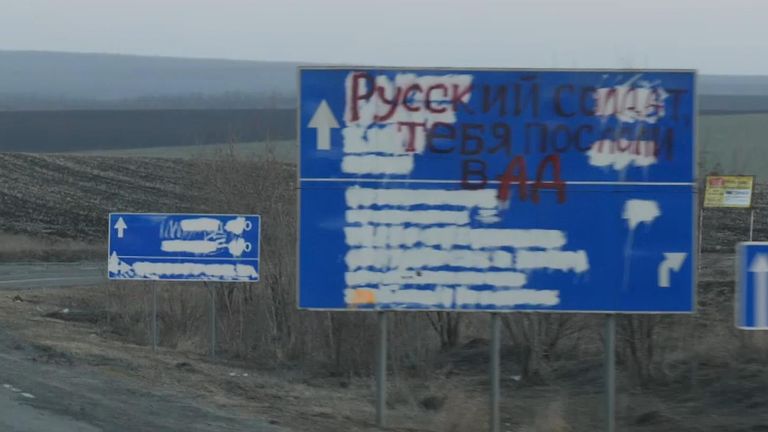 Image: Outside Izyum, a sign reads: 'Russian soldier,, you've been sent to hell'

There were trucks loaded up with ammunition and anti-aircraft guns, driven in the direction of the front.

We also passed hundreds of troops, perched on the top of armoured vehicles, being transported in the same direction.

Izyum itself is now unreachable, and the villages that surround it have been flattened by Russian artillery and planes.

We saw bomb craters that were as big as a house in a village called Oskil. 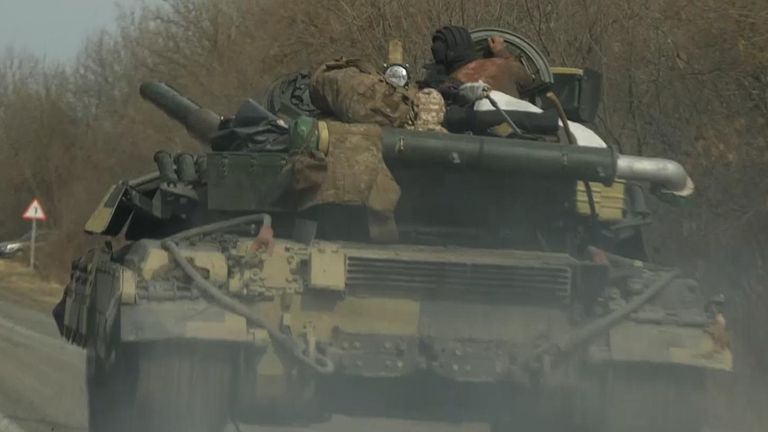 We stopped to talk to a small group of Ukrainian soldiers several kilometres from the front.

They told us we would need "nine lives" to make it to the city.

"It is impossible to get there. If you are talking about our last position [on the road to Izyum], everything that goes there explodes. I don't recommend it," explained a member of the tank crew called Kot.

"They shoot everything that they see, everything they can, but when we make contact with them, they run away, like f****** chickens."

Read more: Zelenskyy offers Putin a way out of war - but will Russia's leader budge? 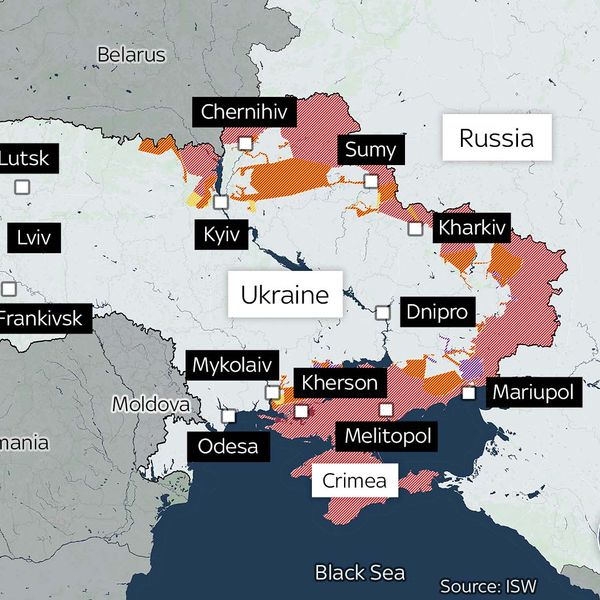 We found a general sense of confidence here, and it came as something of a surprise.

The Ukrainian military has made some limited gains over the past few days in places, and the unit members seemed to think they could win.

"The only thing [the Russians] can do is use rockets, 'grad' missiles, aviation, and that is all. When you start a battle with them, at that moment they run away."

"Don't you feel vulnerable in that thing?" I said, pointing to his tank. "You can hear Russian planes circling overhead."

But he replied: "I don't care. It doesn't bother me. This is a great thing. So, they can fly and fight? But there will be a time when they run out of ammunition, and then we can talk, and we will talk differently." 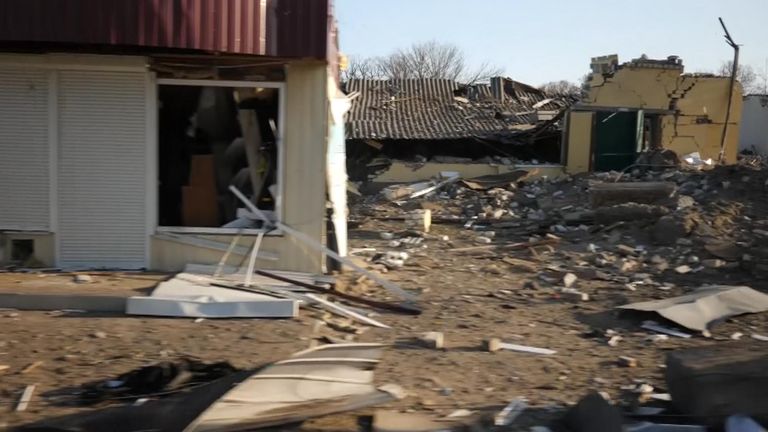 Image: The Russian shelling has been relentless

They may feel confident of success on the battlefield, but many residents in eastern Ukraine feel scared.

We saw hundreds of local residents heading west, in their own, self-organised convoys.

The cars have signs in the windows saying, "children" and "people".

But a spot in a convoy is not an option for the people of Izyum. The city is encircled by the Russians, with some 20,000 people thought to be stuck inside.

We met a man who managed to escape by foot. The decision to flee was made, he said, after Russian troops ransacked his apartment and took his photo away.

He did not want to reveal his identity, explaining that his relatives are still in the city.

"When they constantly drive, drive, drive around you, those tanks, tanks. Then bang, bang. They methodically shell the town, without even thinking of what they are shelling."

He left the city as a member of a group of eight, swimming through an icy river, then walking for miles.

"We were shelled on the way there. No hits, thank God. There are craters and grad missiles sticking out everywhere. So far, so good. Everybody was alive, thank God."

The damage here is extensive, touching everyone and everything, and the positioning and the pleas of the negotiating teams feel very far away.