Third party to probe Oxford High’s actions ahead of shooting

A third party will investigate events at Oxford High School that occurred before a school shooting that left four students dead and six other students and a teacher wounded, the Michigan district’s superintendent said Saturday. 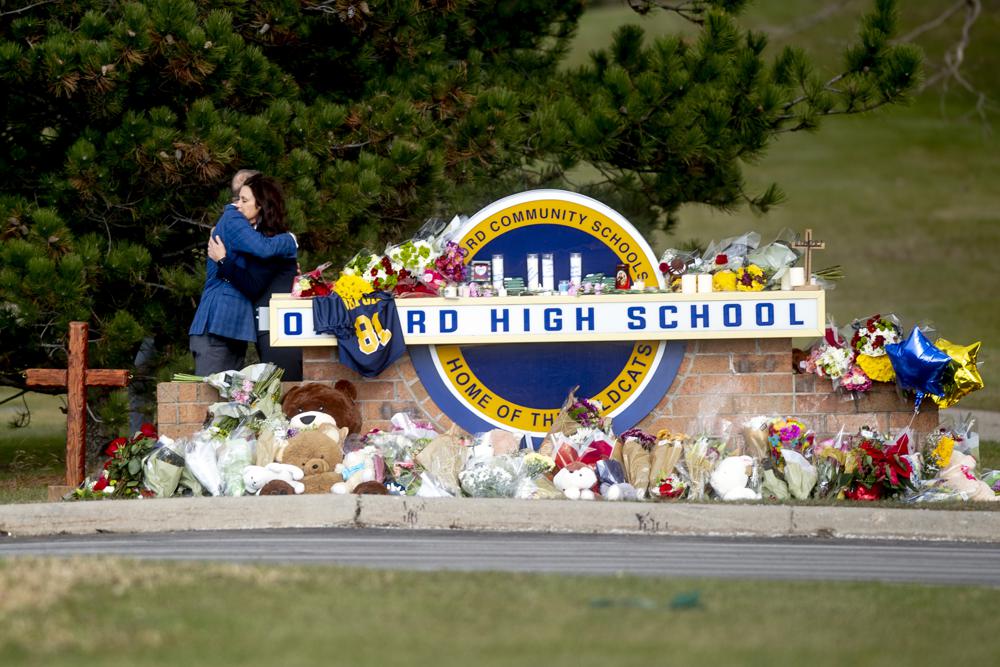 Gov. Gretchen Whitmer embraces Oakland County Executive Dave Coulter as the two leave flowers and pay their respects Thursday morning, Dec. 2, 2021 at Oxford High School in Oxford, Mich. A 15-year-old boy has been denied bail and moved to jail after being charged in the Michigan school shooting that killed four students and injured others.(Jake May/The Flint Journal via AP)

“It’s critically important to the victims, our staff and our entire community that a full and transparent accounting be made,” Throne said.

His comments came after a news conference Friday by Oakland County Prosecutor Karen McDonald that detailed numerous warning signs from the student charged in the shooting: His search for gun ammunition on a cellphone, drawings of blood on a school desk and a written plea for help. 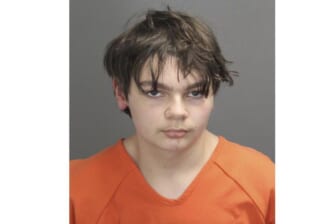 On Tuesday at the school, roughly 30 miles (50 kilometers) north of Detroit, the student was sent back to the classroom after a school meeting with his parents. Three hours later, the shooting occurred.

“The school should have been responsible to relay that to the sheriff’s office. It looks like this could have been prevented,” Robert Jordan, founder and director of St. Louis-based Protecting Our Students, said Friday. “People died because of those mistakes.”

In addition to Jordan, parents of students slain in a 2018 school shooting in Florida say police should have been alerted before Tuesday’s rampage.

The suspect in the Oxford High shooting, Ethan Crumbley, 15, is now charged as an adult with murder, terrorism and other crimes. 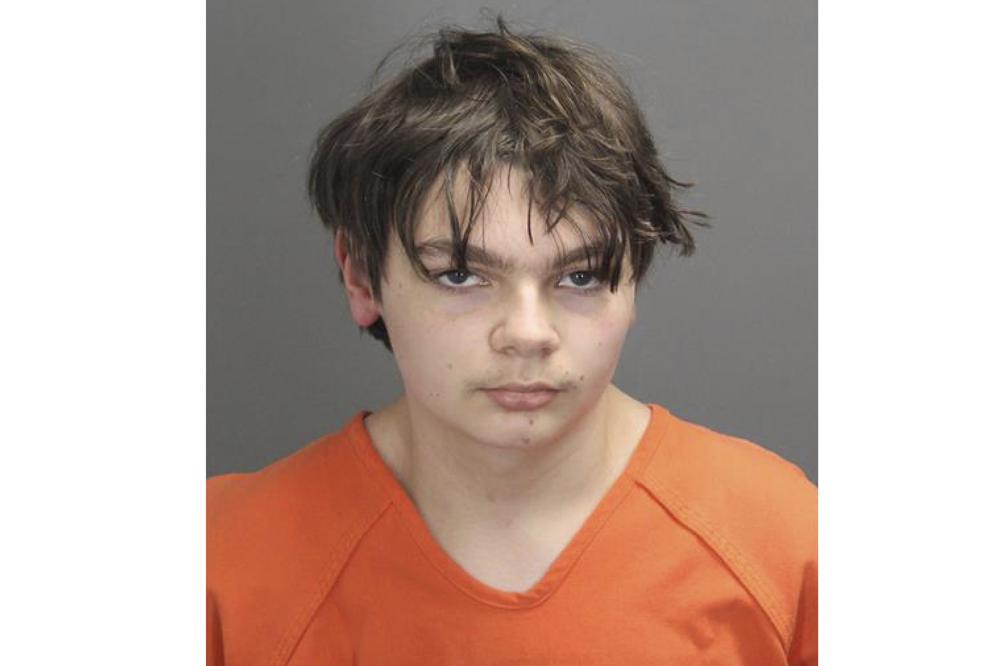 This booking photo released by the Oakland County, Mich., Sheriff’s Office shows Ethan Crumbley, 15, who is charged as an adult with murder and terrorism for a shooting that killed four fellow students and injured more at Oxford High School in Oxford, Mich., authorities said Wednesday, Dec. 1, 2021. (Oakland County Sheriff’s Office via AP)

On Friday, prosecutors charged his parents, James and Jennifer Crumbley, with four counts each of involuntary manslaughter. They pleaded not guilty on Saturday and a judge imposed a combined $1 million bond.

The 9mm semi-automatic pistol used in the shooting was bought at a local gun shop on Black Friday by James Crumbley as an early Christmas present for his son, authorities said. 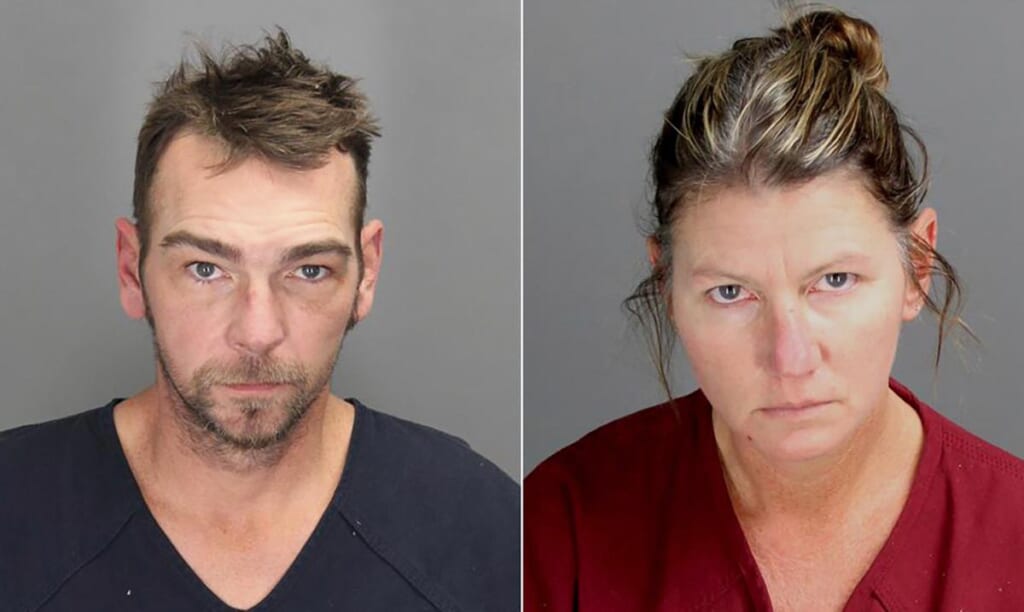 School officials became concerned about the younger Crumbley on Monday, a day before the shooting, when a teacher saw him searching for ammunition on his phone, McDonald told reporters.

On Tuesday, a teacher found a note on Ethan’s desk and took a photo. It was a drawing of a gun pointing at the words, “The thoughts won’t stop. Help me,” McDonald said.

There also was a drawing of a bullet, she said, with words above it: “Blood everywhere.” Between the gun and the bullet was a person who appeared to have been shot twice and is bleeding, she said. “My life is useless” and “The world is dead” also were written.

Ethan Crumbley and both his parents met with school officials at 10 a.m. Tuesday. His parents left, and Ethan went back to his classes with his backpack, where investigators believe he stashed the gun. Authorities were not notified, something that county Sheriff Michael Bouchard said he wishes would have been done.

By 1 p.m. Tuesday, the school erupted in gunshots, chaos and bloodshed.

“The school had the responsibility to be doing an immediate threat assessment on the student and bringing into that conversation the sworn police officer and law enforcement,” said Lori Alhadeff, whose 14-year-old daughter, Alyssa, was one of 17 students slain in 2018 at Marjory Stoneman Douglas High in Parkland, Florida.

About five weeks before the Stoneman Douglas shooting, an FBI tip line received a call saying former student Nikolas Cruz had bought guns and planned to “slip into a school and start shooting the place up.”

That information was never forwarded to the FBI. Cruz, who had been expelled from the school a year earlier and had a long history of emotional and behavioral problems, never was contacted.

“We have to take these threats seriously,” Alhadeff said.

But looking at such an issue after the fact raises other questions, said Christopher Smith, professor of Law and Public Policy at Michigan State University and chair of the Michigan Coalition to Prevent Gun Violence.

You have to consider whether the “teacher and school officials specifically have in their training that you need to report all these things,” Smith said.

In a video message to the community Thursday night, Throne acknowledged the meeting of Crumbley, the parents and school officials. Throne offered no details but said that “no discipline was warranted.”

In his statement Saturday, Throne elaborated on the events of Tuesday morning, saying the student was taken to the guidance counselor’s office where he claimed the drawing was part of a video game he was designing and that he planned to pursue video game design as a career. He worked on homework while waiting for his parents as counselors watched him.

“At no time did counselors believe the student might harm others based on his behavior, responses and demeanor, which appeared calm,” Throne said.

“While both of his parents were present, counselors asked specific probing questions regarding the potential for self-harm or harm to others,” Throne said, adding counseling was recommended for him, and his parents were notified that they had 48 hours to seek it. “When the parents were asked to take their son home for the day, they flatly refused and left without their son, apparently to return to work.”

He said that the student had no prior disciplinary infractions so he was allowed to return to the classroom instead of being “sent home to an empty house.”