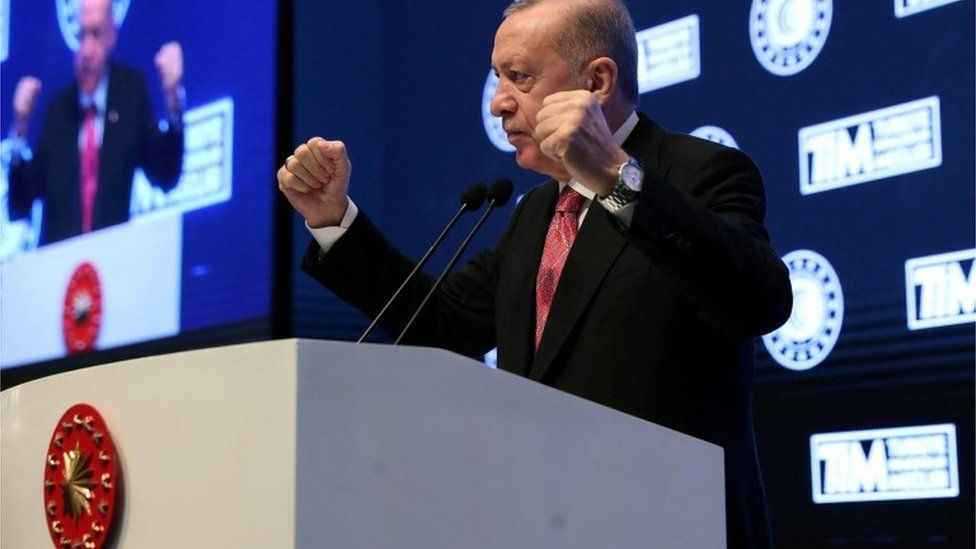 President Erdogan told business leaders on Monday Turkey was reaping the rewards of his policies.

Turkey's annual inflation rate has soared to a 19-year high, underlining the country's financial turmoil and alarm over its president's policies.

Prices hit more than 36% December as the cost of transport, food and other staples ate into household budgets.

Most central banks raise interest rates to help cool inflation but Turkey has gone the other way.

It has meant a collapse in the value of the lira, as Tayyip Erdogan prioritises exports over currency stability.

The lira shed 44% of its value against the dollar last year, and fell another 4% on Monday.

Mr Erdogan has described interest rates as "the mother and father of all evil," and has used more unorthodox policy to try to dampen prices including intervening in foreign exchange markets.

In a speech on Monday he said Turkey was "going through a transformation in economy and rising to the next league".

He said the nation is "reaping the fruits especially in exports of our country's efforts and hard work in the past 20 years to bolster our foreign trade".

One economist forecast that inflation could reach as high as 50% by the spring unless the direction of monetary policy was reversed.

"Rates should be immediately and aggressively hiked because this is urgent," said Ozlem Derici Sengul, founding partner at Spinn Consulting, in Istanbul. But she accepted the central bank was unlikely to act.

Mr Erdogan overhauled the central bank's leadership last year. The bank has slashed rates to 14% from 19% since September.

The subsequent accelerating surge in prices and drop in the lira have upended household and company budgets. 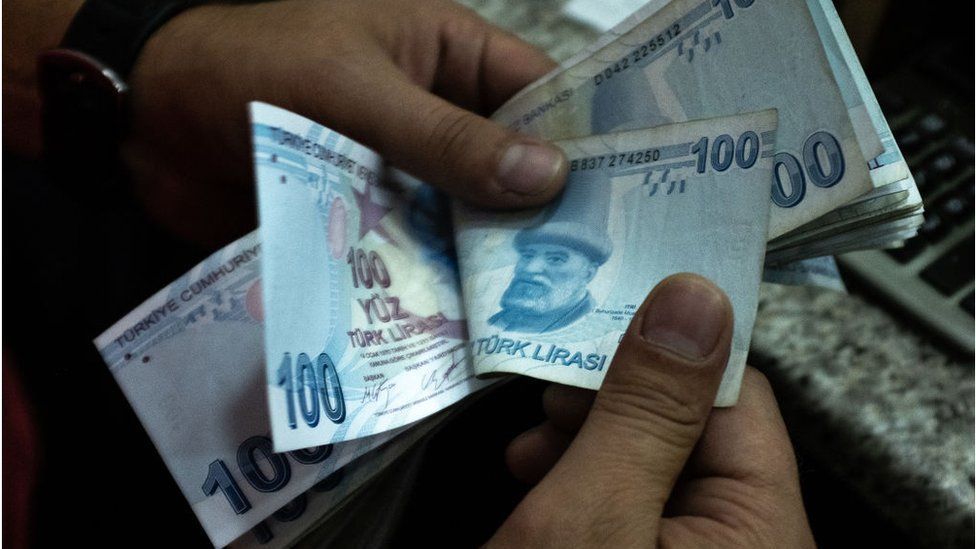 There were pictures last month of people queuing for subsidised bread in Istanbul, where local officials have said the cost of living was up 50% in a year.

The central bank has argued that temporary factors have been driving prices, and had forecast in October it would end the year at 18.4%.

To curb the lira's weakness, Mr Erdogan unveiled a scheme three weeks ago in which the state protects converted local deposits from losses versus hard currencies. That sparked a sharp 50% rally in the lira with support from the central bank.

But the lira then sank again last week, prompting a call on Friday from the president for people to keep all their savings in lira and shift gold into banks.

The economic turmoil has hit President Erdogan's opinion poll ratings ahead of planned elections scheduled for no later than mid-2023.

More on this story