When did ‘authentic’ become an art direction?

ECD, Simon Richings, explores the rise of pseudo-authenticity and how brands attempting to simulate ‘realness’ can end up with phony baloney that consumers see right through.

What does ‘authentic’ advertising look like? The argument is that young consumers are turned off by slick content from brands.

The stuff that does well in feeds doesn’t look like that. It’s lower fidelity. More raw; more spontaneous, more human and more authentic.

To speak to an audience, brands must be like that audience. And that means making content in the way that the audience does. This is particularly appealing to brand marketers with limited budgets – as low-fi content is often cheap, cheap, cheap.

This argument is, unfortunately, complete bollocks.

The word authentic seems to have lost its meaning and, in the worst cases, has come to stand for its opposite – reduced to a superficial style or ‘look and feel’ to be applied to everything, whatever the brand.

The ever-evolving TikTok has been the catalyst for the most recent surge in this type of pseudo-authenticity. Much of the platform’s most successful content is single shot, selfie-style videos, and a huge number of those aren’t stand alone beginning/middle/end films, they’re responses to trends and challenges (like a thousand slightly different punchlines to one joke).

Is it important where the lip-synced soundbite came from? Not really. The point is to add your own variation. As trends blow up, brands can join in too, right? Maybe. The problem is that big brands are not their audience.

For me, there’s something just plain weird about a brand boardroom wanting to adopt the aesthetics or behaviour more suited to a gen-z bedroom. They’ll swagger in like Steve Buscemi in the decade old ‘how do you do, fellow kids?’ meme, then wonder why they aren’t getting all the likes.

Consumers (also called people) are savvy. They know when the low-fi look is a sham, because they can see who it is coming from.

The other way marketing gets authenticity wrong is getting it tangled up with the desire to tell meaningful and sincere stories that transcend boring old ‘selling stuff’ messages.

Brands seek out causes to stand next to, saying ‘we believe in this’ and hoping people like them more. I’m sure that the marketers at these companies really do believe in BLM or the collective fight against climate change, but a principle isn’t a principle until it costs you something, as a wise ad man once said.

Good purpose-driven brands (from Dove to Patagonia) know this well. If you’re not contributing something positive and tangible, taking a stand on an issue is just going to spotlight that same inauthenticity. This is a whole other can of worms that I’m now going to carefully re-seal and back away from slowly…

However, I absolutely do think big brands can join in. I just don’t think they should pretend to be just like the audience they’re trying to connect with. Consumers actually do want authenticity in marketing, and for them this contentious word is still connected to truth and honesty. 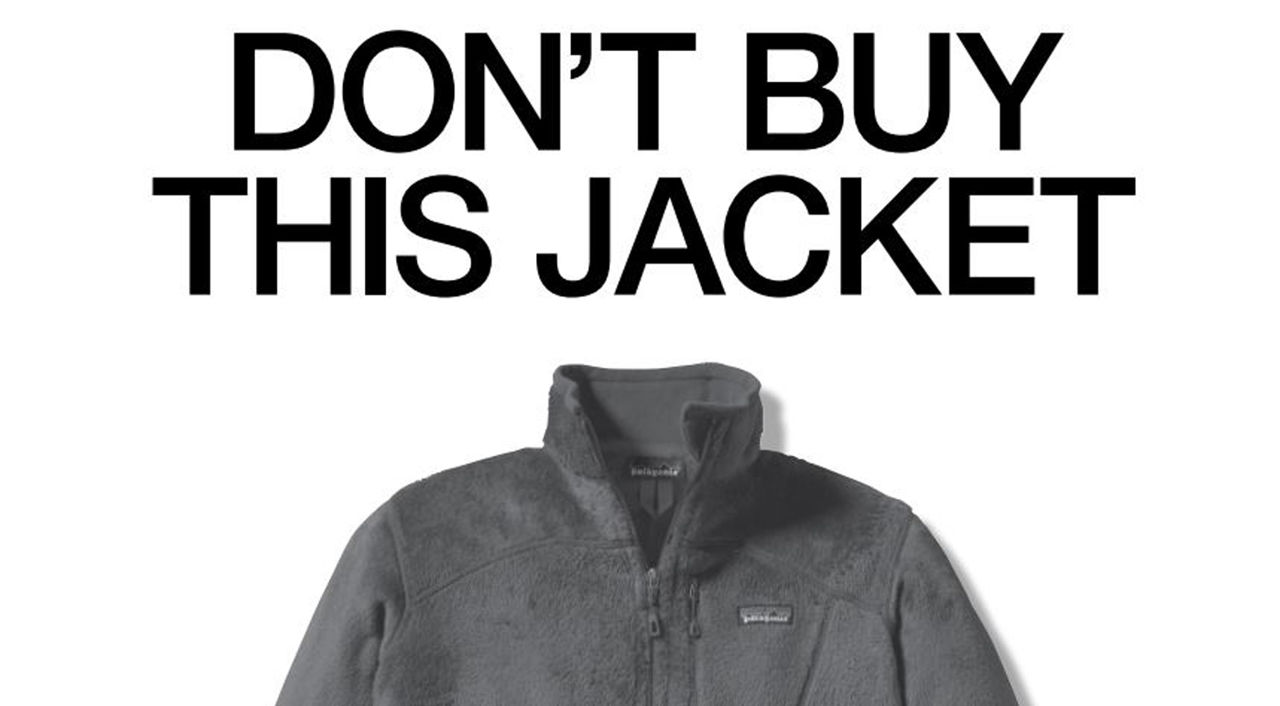 In the run up to Christmas 2013, eco-friendly clothing brand Patagonia launched a campaign to urge people to consider the effect of consumerism on the planet.

Also, an honest sales pitch isn’t as much of a problem as we’ve been led to believe. If your approach is a clear ‘we know you know this is an ad, but don’t worry, we’re going to entertain you en route to the message about our product’ people are pretty much fine with that.

It’s when there’s a clumsy, hollow attempt to connect through beliefs and statements that aren’t really backed up by anything tangible that things start to ring untrue.

And why shouldn’t you experiment with more ambitious visual storytelling, with higher production values? (There’s a lesson in Japanese advertising – search for ‘best Japanese ads’ if you’re not sure what I’m referring to.)

One of the many reasons it’s so wild is because authenticity and sincerity are so important. To try and fake it and be ‘of the audience’ would be duplicitous. Therefore, so much of it is obvious, over-the-top fiction and comedy that deliberately signals ‘this isn’t real.’

But that’s not what TikTok looks like, you might be saying. Well, the people making TikToks aren’t really concerned with rules. They’re inventing all kinds of new ways to use the platform all the time. Who knows what it will look like this time next week.

Maybe brands should mix it up too, rather than trying to follow and play endless catch-up.

This is all a long-winded way of saying that amazing things can happen in TikTok, Instagram, Twitter and whatever’s next. Marketing that’s honest and original and entertaining and emotional. Marketing that grows brands and isn’t trying to trick anyone.

This article was originally published in shots.